How Can Obama Look at these Two Charts and Conclude that America Should Have Higher Double Taxation of Dividends and Capital Gains?

As discussed yesterday, the most important number in Obama’s budget is that the burden of government spending will be at least $2 trillion higher in 10 years if the President’s plan is enacted.


But there are also some very unsightly warts in the revenue portion of the President’s budget. Americans for Tax Reform has a good summary of the various tax hikes, most of which are based on punitive, class‐​warfare ideology.


In this post, I want to focus on the President’s proposals to increase both the capital gains tax rate and the tax rate on dividends.


Most of the discussion is focusing on the big increase in tax rates for 2013, particularly when you include the 3.8 tax on investment income that was part of Obamacare. If the President is successful, the tax on capital gains will climb from 15 percent this year to 23.8 percent next year, and the tax on dividends will skyrocket from 15 percent to 43.4 percent.


But these numbers understate the true burden because they don’t include the impact of double taxation, which exists when the government cycles some income through the tax code more than one time. As this chart illustrates, this means a much higher tax burden on income that is saved and invested.


The accounting firm of Ernst and Young just produced a report looking at actual tax rates on capital gains and dividends, once other layers of tax are included. The results are very sobering. The United States already has one of the most punitive tax regimes for saving and investment.


Looking at this first chart, it seems quite certain that we would have the worst system for dividends if Obama’s budget is enacted. 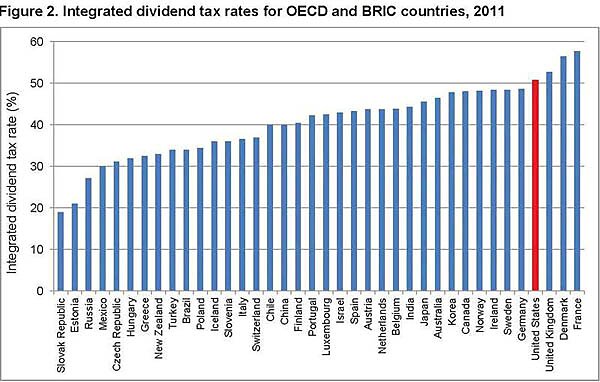 The good news, so to speak, is that we probably wouldn’t have the worst capital gains tax system if the President’s plan is enacted. I’m just guessing, but it looks like Italy (gee, what a role model) would still be higher. 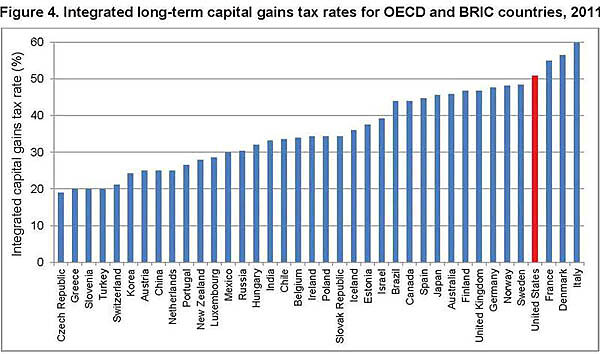 Let’s now contemplate the potential impact of the President’s tax plan. I am dumbfounded that anybody could look at these charts and decide that America will be in better shape with higher tax rates on dividends and capital gains.


This isn’t just some abstract issue about competitiveness. As I explain in this video, every single economic theory — even Marxism and socialism — agrees that saving and investment are key for long‐​run growth and higher living standards.

So why is he doing this? I periodically run into people who are convinced that the President is deliberately trying to ruin the nation. I tell them this is nonsense and that there’s no reason to believe elaborate conspiracies.