American Nightmare is in some ways the most profound of the three books I have written for Cato. It covers a wide range of issues, including a detailed explanation of the 2008 financial crisis. But the overarching theme is that urban planning and zoning are best viewed as a form of economic warfare by the upper and middle classes against the working and lower classes. While that might not have been the original intent, to judge by the smug attitudes of the beneficiaries of such planning and zoning, they are perfectly happy with the results.

The book, therefore, was really about inequality, an issue that of course has been made popular and controversial by Thomas Piketty's book Capital in the Twenty-First Century. Piketty's thesis is that income inequality is necessarily rising because the returns to capital wealth are greater than overall economic growth, thus giving people one more reason to hate capitalists.

Last month, a paper by an MIT graduate student in economics named Matthew Rognlie, examined Piketty's thesis in detail. Rognlie found that, contrary to Piketty, the returns on most kinds of wealth and capital have not been greater than overall economic growth, and therefore haven't been contributing to income inequality. The one exception, Rognlie found, was housing.

"Is capital income displacing labor income?" asks Rognlie in a Brookings paper. "Only if you count housing." As The Economist summarizes Rognlie's results, "surging house prices are almost entirely responsible for growing returns on capital," which means that "rising house prices may be chiefly responsible for rising inequality." As a result, Rognlie concludes, Piketty should have titled his book, Housing in the Twenty-First Century. 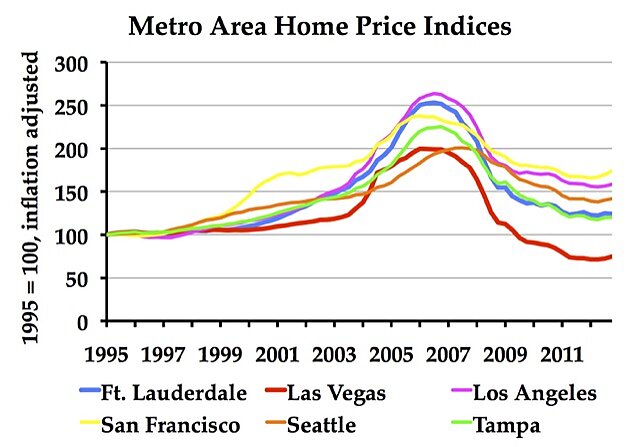 Here's the housing bubble that contributed to the 2008 financial crisis and growing wealth inequality.

American Nightmare showed that those surging housing prices only happen in certain regions, specifically those that use planning and zoning to increase urban densities. This includes most of Europe, Australia, much of New Zealand, most coastal states in the United States, and a few Canadian cities including Vancouver, Victoria, Toronto, and Montreal.

Housing is also a factor in many developing nations where most land is still owned by the government, or held in trust by the government on behalf of local villages. This includes most of Africa, much of South America, and part of Asia. In such places, the only people who can enjoy the benefits of "surging housing prices" are the few who own their own land, and since land ownership opportunities are limited due to widespread state control, everyone else stays poor. (In the United States, the closest analogues are Nevada, where 90 percent of the land is owned by the government, and Hawai'i, where more than 90 percent of the land is owned by a handful of corporations and trusts that might be willing to sell it for housing, but the state governent won't let them.) 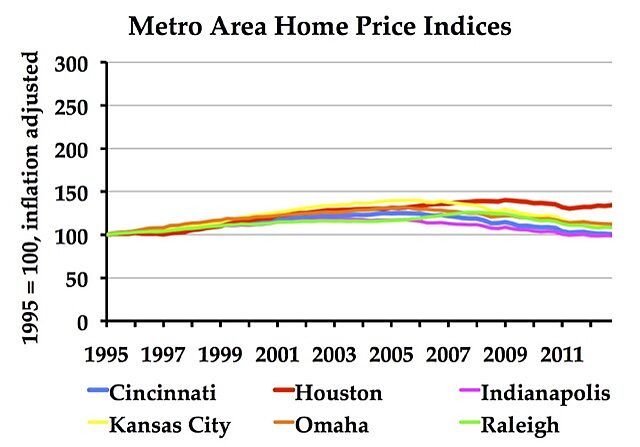 Urban areas like Houston, Indianapolis, and Raleigh were and are growing much faster than the ones shown in the previous chart, yet experienced no bubble because they didn't have the restrictive land-use rules found in the bubble regions.

On the other hand, places that don't practice restrictive zoning and land-use planning don't see housing prices surge. The classic example is Houston, but in fact the infamous housing bubble that peaked in 2006 only took place in a minority of American cities and states. No bubbles were seen in most of the South (except Florida), the Midwest, or the arid West (except Arizona and Nevada).

In other words, Piketty isn't entirely wrong. As The Economist concludes, "a story in which a privileged elite uses its political clout to create economic rents for the few (albeit through the planning system) fits Mr Piketty’s argument to a tee." But anyone who concludes that this is some conspiracy by the 1 percent is wrong: instead, as American Nightmare shows, it is a conspiracy by the 30 percent (at least in the developed world) who are among the middle and upper classes who own their own homes.

The solution to inequality, therefore, isn't to make war on the upper classes through punitive taxation, but simply to relax the zoning and other land-use restrictions that make housing prices so volatile. This will both reduce the returns to housing and make housing more affordable to lower-income families so they can enjoy the benefits of modest wealth accumulation that come with property ownership.