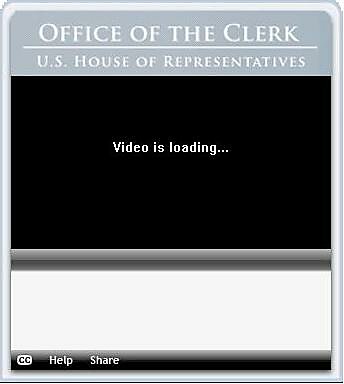 The potential of streaming video from the House of Representatives is so great that my first impression of the House's new video offering, HouseLive.gov, has been disappointment. There is much room to improve HouseLive.gov, and I hope it will improve.

At first, I couldn't find any video that was actually live. (That would inject a bit of irony into the name, eh?) But there is live video: On the homepage, scroll down to the top of the "Most Recent Sessions" chart. If the top of the list has an item called "In Progress," the House is in session. Clicking the video link will get you live video from the House floor.

(Don't be fooled by the "Subscribe to Live Feeds" box. Those are RSS feeds, which are "live"---as in regularly updated. They're not live video or audio.)

Most people will probably access this from the House clerk's familiar "Floor Summary" page, which has near-real-time updates about House activity. But that page says "Streaming video is not available for this session." That's a hiccup that should be easy to fix.

Selecting a past day, one can watch the video of that day, but in my early tests, you had to watch the video from the beginning. I don't think many people are going to watch 10 hours of video to pick up their representative's remarks on the bill to congratulate Camp Dudley of Westport, New York, on its 125th anniversary.

I've been testing in Firefox. In Internet Explorer, I got some links that do things. It appears you will be able to navigate around a day's video based on the activity of the House. That is, you can jump to where the House began debate on the Camp Dudley bill.

Hopefully, the system will work in standards-compliant browsers, not only Microsoft's. I note that the video currently plays only in Windows Media Player or Microsoft's Silverlight. I'll leave it to friends better versed in video to critique the selection of formats, but I have doubts about these two as being the best, and most open, available.

When you do navigate around, I don't see that the "share" link changes. This needs fixing so that people can direct friends and colleagues to key portions of debates. In fact, you should be able to link to any point in the video. Ideally, there should be an embed function that allows defined segments of video to go into blog posts and such. That latter one is a big ask, but Congress is a big, important institution.

It's early yet. Maybe these things are in the works or on the drawing board. Rolling HouseLive.go out in "beta," getting feedback, and fixing it is A-OK. But sometimes government agencies set a course and have a hard time changing after that. The Thomas legislative system, brilliant as it was for 1995, still isn't publishing bill data in good formats, and a private provider has had to take up the slack.