But what about the transparency oriented processes that President Obama and leaders like Speaker Pelosi promised the public? Recall that the Speaker promised to post the health care bill online for 72 hours before a vote back in September.

There was debate about whether she stuck to her promise then. And it was probably a one-time promise. It's almost certain that she will not do so now. If she lines up the votes to pass the bill, the vote will happen. Right. Then.

What about President Obama's promise to put health care negotiations on C-SPAN? The daylong roundtable debate on health care was an engaging illustration of what happens when you do transparent legislating. Voters got a clearer picture of where each side stands---and perhaps saw that there actually is some competence on both sides of the aisle. Some competence.

The health care negotiations going on right now are the ones that matter. This is when the most important details are being hammered out. This is when the bargaining that draws the public's ire is happening. But I'm not seeing it on C-SPAN.

President Obama's promise may have been naive, but that doesn't excuse breaking it. The inside negotiations going on this week represent an ongoing violation of the president's C-SPAN promise.

And there's good reason to anticipate that the president will violate his Sunlight Before Signing promise as well. This was his promise to post bills online for five days after he receives them from Congress before signing them into law. 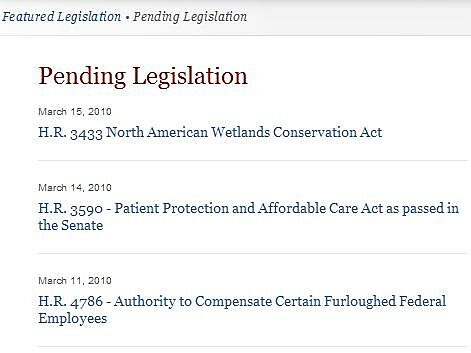 The reason why I'm so confident of a prospective violation---aside from the promise being flouted more often than not---is that the White House has posted the Senate-passed health care overhaul bill on the "Pending Legislation" page of Whitehouse.gov. H.R. 3590 as passed by the Senate is right there in among the bills Congress has passed, which are getting their five-day public review.

If the White House plans to argue that the health care overhaul legislation got the five-day public review President Obama promised, that will not fly at all.

The substance of the Sunlight Before Signing promise is to post bills for five days after Congress' final vote. (I've recommended starting the clock at "presentment," the formal constitutional step when the president receives a bill from Congress.)

Something other than that, such as posting the Senate bill before it passes the House---while failing to post the "fixer" bill for five days---would fundamentally violate the president's transparency promise.

What an irony if all this were to happen this week, which, after all, is Sunshine Week!