Farm bills traditionally contain both farm subsidies and food subsidies (e.g., food stamps). Unable to pass a traditional farm bill passed this year, the House Republican leadership separated the two components. The House passed a stand-alone farm subsidy bill in the summer and now it’s set to vote on a bill that would trim the Supplemental Nutrition Assistance Program (a.k.a., food stamps) by $39 billion over ten years.

The cost of the food stamps program has seen a dramatic rise since 2000. Both Republicans and Democrats supported expansions of the program in the 2000s. And because the program is counter-cyclical, the rolls exploded with economic downturn and weak recovery. 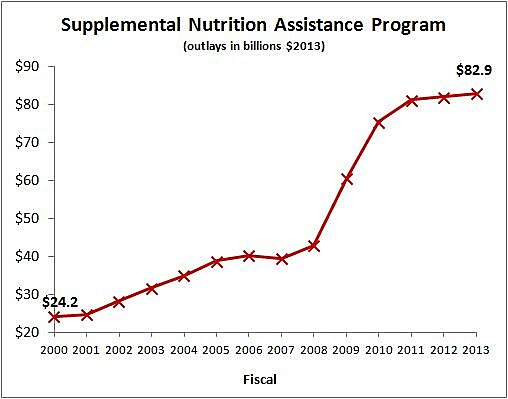 The Congressional Budget Office’s May 2013 baseline projects total food stamps spending of $764 billion over the next ten years. The CBO projects that the House bill would spend $725 billion over that period. The following chart shows the projected year-to-year difference. 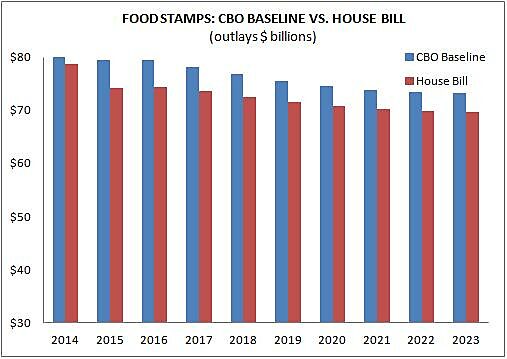 The downward trend reflects the CBO’s assumption that stronger economic growth going forward will reduce the number of people collecting benefits. However, if the CBO’s economic assumptions turn out to be optimistic, the actual outlays could be higher. The third chart shows what the CBO projected SNAP spending would be under the 2008 farm bill. Spending for food stamps this year will be almost twice what the CBO projected in 2008. 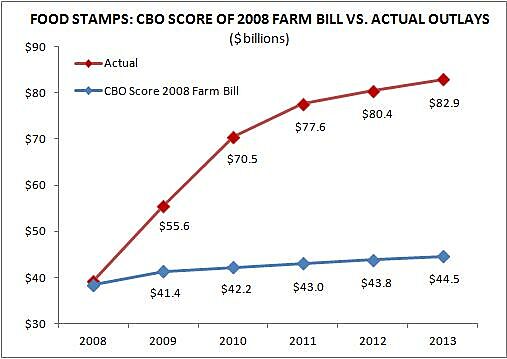