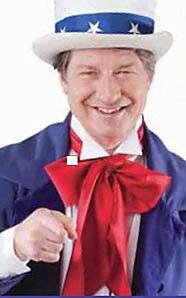 I decided last year to give a young colleague a post-graduate course in political science and economics — P. J. O’Rourke’s books Parliament of Whores and Eat the Rich. So I went to my local Barnes & Noble to search for them. Not in Current Affairs. Not in Economics. No separate section called Politics. I decided to try Borders. But first — to avoid yet more driving around — I went online to see if my local Borders stores had them in stock. Sure enough, they did, in a couple of stores just blocks from the Cato Institute. Checking to see where in the store I would find them, I discovered that they would both be shelved under “Humor–Humorous Writing.” Oh, right, I thought, they’re not books on economics or current affairs, they’re humor.

Yes, P.J. is one of the funniest writers around. But what people often miss when they talk about his humor is what a good reporter and what an insightful analyst he is. Parliament of Whores is a very funny book, but it’s also a very perceptive analysis of politics in a late 20th century democracy. And if you read Eat the Rich, you’ll learn more about how countries get rich -- and why they don’t -- than in a whole year of econ at most colleges. In fact, I’ve decided that the best answer to the question “What’s the best book to start learning economics?” is Eat the Rich.

On page 1, P. J. starts with the right question: “Why do some places prosper and thrive while others just suck?” Supply-and-demand curves are all well and good, but what we really want to know is how not to be mired in poverty. He writes that he tried returning to his college economics texts but quickly remembered why he hated them at the time--though he does attempt, for instance, to explain comparative advantage in terms of John Grisham and Courtney Love. Instead he decided to visit economically successful and unsuccessful societies and try to figure out what makes them work or not work. So he headed off to Sweden, Hong Kong, Albania, Cuba, Tanzania, Russia, China, and Wall Street.

In Tanzania he gapes at the magnificent natural beauty and the appalling human poverty. Why is Tanzania so poor? he asks people, and he gets a variety of answers. One answer, he notes, is that Tanzania is actually not poor by the standards of human history; it has a life expectancy about that of the United States in 1920, which is a lot better than humans in 1720, or 1220, or 20. But, he finally concludes, the real answer is the collective "ujamaa" policies pursued by the sainted post-colonial leader Julius Nyerere. The answer is "ujaama—they planned it. They planned it, and we paid for it. Rich countries underwrote Tanzanian economic idiocy."

From Tanzania P. J. moves on to Hong Kong, where he finds “the best contemporary example of laissez-faire….The British colonial government turned Hong Kong into an economic miracle by doing nothing.”

You could do worse than to take a semester-long course on political economy where the texts are Eat the Rich and Parliament of Whores. So, bookstore owners, leave them in the Humorous Writing section for sure, but also put copies in the Economics, Politics, and Current Affairs sections.

And of course P. J. would want me to mention his brand-new book on American politics, Don't Vote: It Just Encourages the Bastards. Buy 'em all and make it a year-long course.