Speaker Nancy Pelosi says that the massive spending bill Congress is about to pass is "historic and transformational." She has a point. Here's a visual of what it's helping to do to the federal deficit: 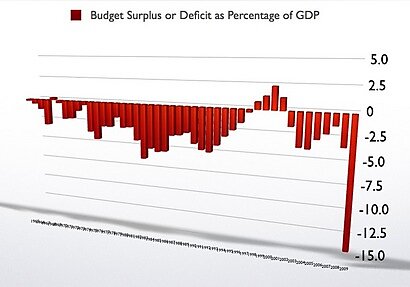 The federal budget is already plunging into deficit. It hardly seems the time to add another $800 billion of spending. Doing so may very well prove to be transformational, like pushing the economy over a cliff.

The Washington Post reports, "The Obama administration's economic stimulus plan could end up wasting billions of dollars by attempting to spend money faster than an overburdened government acquisition system can manage and oversee it, according to documents and interviews with contracting specialists."

And as noted here previously, lobbyists have loaded the bill down with special-interest provisions, such as "a controversial proposal for a magnetic-levitation rail line between Disneyland, in California, and Las Vegas," a project favored by Harry Reid. A levitating train from Fantasyland to a city built on gambling. If that isn't a metaphor for this bill, I don't know what is.

But it's not the only one. The Post also notes funding for lithium batteries, Filipino veteran payments, small shipyards, North Carolina-made TSA uniforms, and "clean coal."

Given all that, it's especially disappointing that President Obama and Congress continue to ignore his campaign promise to let all legislation be publicly available for five days before he signs it. In this case, even members of Congress had trouble getting their hands on the actual $790 billion bill they were expected to vote on. Congress should listen to Bill Niskanen:

This is the fifth time in my adult life that the president has asked for or asserted unprecedented authority on an expedited basis with little or no congressional review. Each of the prior occasions turned out to be a disaster.