As the chart below indicates, the United Kingdom has a large budget deficit solely because government spending has increased to record levels (OECD data). Unfortunately, the new Tory-Liberal coalition government has decided that taxpayers should be punished for all the over-spending that occurred when the Labor government was in charge. 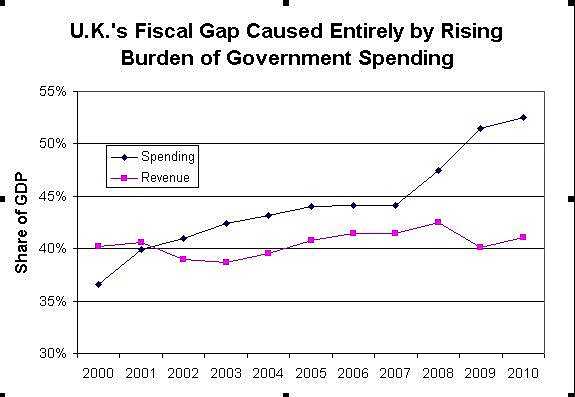 The Telegraph reports that the top capital gains rate will jump to 28 percent, up from 18 percent (the new government foolishly thinks this will result in more revenue). But the biggest change is that the value-added tax will increase to 20 percent. According to Business Week, the Chancellor of the Exchequer (the British equivalent of Treasury Secretary) actually bragged that the VAT increase was good since it would generate "13 billion pounds we don’t have to find from extra spending cuts." Here are some further details from Business Week about the disappointing fiscal news from London.

British Chancellor of the Exchequer George Osborne increased the value-added tax rate to 20 percent from 17.5 percent in the first permanent change to the levy on sales of goods and services in almost two decades. “The years of debt and spending make this unavoidable,” Osborne told Parliament in London in his emergency budget today as he announced a package of spending cuts and tax increases to cut the U.K.’s record deficit. ...“We understand that the budget deficit needs to be tackled but we think the focus needs to be cutting public spending over tax rises,” Krishan Rama, a spokesman for the industry lobby group, the British Retail Consortium, said in a telephone interview yesterday. ...VAT has remained at 17.5 percent in every year except one since 1991, when John Major’s Conservative administration raised the rate from 15 percent to help plug a deficit.

The one tiny glimmer of good news from the budget is that the corporate tax rate is being reduced from 28 percent to 24 percent, which is probably a reflection of the strong and virtuous tax competition that is forcing greedy governments to lower tax rates in order to attract and/or retain business activity. There also is a two-year pay freeze for government bureaucrats, but this is hardly good news since a 30-percent pay cut is needed to bring compensation down to private sector levels.