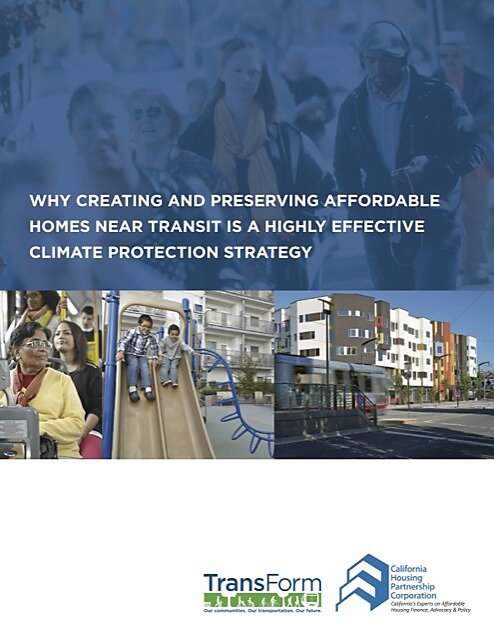 TransForm, a smart-growth group in Oakland, has analyzed California's household travel survey data and made what it thinks is an important discovery: poor people drive less than rich people. Moreover, poor people especially drive less than rich people if the poor live in a high-density development served by frequent transit (that is, a transit-oriented development or TOD).

Based on this, TransForm proposes that California build lots of "affordable housing" in the TODs, then herd encourage poor people to live in the TODs. Apparently, TransForm's thinking is that moving poor people into TODs will have the greatest effect on driving, energy consumption, and greenhouse gas emissions. Putting "more affordable homes near transit ... would be a powerful and durable GHG reduction strategy," says TransForm (emphasis in the original).

Unfortunately, TransForm's proposal is grounded on a seriously flawed analysis and morally questionable reasoning. First, TransForm has committed a simple arithmetic error when it concludes that the best greenhouse-gas reduction strategy would be to focus on low-income people. Though the data show rich people in TODs drive only a third less than rich people away from TODs, the rich drive so much more than the poor that the greatest impact would come from herding the rich into the TODs.

However, I don't believe TransForm's numbers because TransForm has made the classic error of ignoring self-selection. That is, people of all incomes who want to drive less are more likely to live in TOD-like places, while people who want to drive more are more likely to live away from TOD-like places (which are typically the most congested and least auto-friendly).

Note that all of TransForm's numbers measure miles of driving and other factors per household, not per person. Households in TODs tend to have no children, while households with children are far more likely to live away from TODs. It's a mistake to think that, because people who want to drive less tend to live in TODs, getting people who want to drive more to live in TODs will lead them to drive much less than they do. As economist David Brownstone concludes, after taking self-selection into account, the effect of urban form on driving is "too small to be useful" in reducing greenhouse gas emissions.

TransForm's third error is in failing to calculate the costs of its "powerful and durable GHG reduction strategy." Developable land in the San Francisco Bay Area is very costly, and land in the city and suburban centers that make up the region's TODs and potential TODs is the most expensive of all. Buying that land, building housing on it, and selling or renting it at "affordable" prices is going to require huge subsidies. If I believed in the TOD strategy at all, this would be one more reason to focus on the rich, rather than the poor, as any necessary subsidies would be much smaller. But I suspect that even herding the rich into TODs would end up costing thousands of dollars per ton of abated greenhouse gas emissions, while McKinsey & Company says that anything that costs more than about $50 per ton is a waste of money.

Perhaps most embarrassing, TransForm's herd-the-poor approach to reducing greenhouse gas emissions is condescending (or worse). California's SB 375, a law promoting TODs, imposed an affordable housing mandate that is supposed to be as strong as its greenhouse-gas-reduction mandate, so TransForm poses this idea as one that will solve both problems. But it really won't, partly because the state simply can't afford the billions of dollars in subsidies that would be required to build tens of thousands of "affordable" units of housing in Bay Area TODs.

If TransForm wants to advocate a policy that really would make housing affordable, it should demand that Bay Area counties abandon the urban-growth boundaries that have confined 98 percent of the people in the region to just 17 percent of the land. And if TransForm really wants to target carbon emissions, it should focus on making housing and cars more energy efficient, which is a far more efficient strategy of reducing carbon emissions than trying to get people to live in apartments and take transit.

Instead, TransForm promotes the "pack-'em-and-stack-'em" strategy that has obsessed urban planners for the last three or four decades. We know this strategy doesn't work: between 1980 and 2012, the population density of the San Francisco–Oakland–San Jose urban areas grew by 55 percent, yet per capita transit ridership fell by a third and per capita driving grew by 5 percent.

Aside from the fact that this strategy doesn't work, its moral problems seem to go right past the "progressives" who support it. It's like a movie in which poorly educated villagers are ready to riot about some frightening event, when someone—probably the perpetrator—points at a persecuted minority and yells, "They're the ones who did it—get 'em!"

Sadly, the California politicians who passed SB 375 are all too likely to fall for this line of thinking.