Heavy Rains Increasing, but Not Disproportionately So

A new paper has been published in the journal Geophysical Research Letters that examines trends in heavy rainfall amounts across the U.S. The paper is authored by Newcastle University’s Renaud Barbero and colleagues, and, to summarize, finds that the heaviest rainfall events of the year have been increasing in magnitude since 1951 when averaged across nearly 500 stations distributed across the U.S. (note: results from individual stations may differ from the general finding).

Someone with a critical eye might ask the real question, which is “how much?” That such a number does not jump out of this paper—a cynic would say—probably means it is very small. Read on and you will find the answer.

That rainfall on the rainiest day of the year is increasing is, of itself, hardly surprising considering that the total annual rainfall amount averaged across the U.S. has also been increasing during this same period (again, results from individual locations/regions may (and do) depart from this generality).

Changes in heavy rainfall like this are often luridly described as a “disproportionate increase” in extreme events, or that extreme precipitation increases are “worse than expected.”

This is not the case—or at least wasn’t the case when we published a paper in the International Journal of Climatology on this very subject back in 2004. In that paper we found the same thing that Barbero and colleagues found with regards to the heaviest daily rainfall events of each year—they were getting heavier. But, we were careful to note, that so too was the total yearly rainfall, and as a result, the increase of the heaviest daily rainfall events was completely proportional to the increase in annual rainfall increase. In other words, the increase on the wettest day each year was neither “disproportionate” nor “worse than expected.”

In fact, this result was not a surprise at all. It’s basic climatology.

Let’s have a look, and while we’re at it, we’ll update our old analysis (which ended with data from 2001) with data available from a new “extremes” dataset which runs through 2010.

The “extremes” data set we’ll use is the one compiled by Markus Donat and colleagues and includes gridded data (3.75° longitude x 2.5° latitude grid) on annual daily rainfall extremes as well as data on annual total rainfall. This data is available using this handy on-line tool. We selected the region of interest as shown in Figure 1. 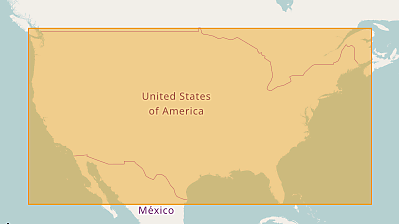 Now, let’s look at the relationship between total annual rainfall and daily maximum rainfall for each year, averaged across the gridcells contained in our study area, as shown in Figure 2. Years with more total rain also have more rainfall on the wettest day of the year. This is no different during the first half of the 20th century (1901-1950; blue points) than it has been in the time since (1951-2010; red points). Any human-caused climate change (which should be more evident in the latter period) hasn’t led to a change in this general climatological relationship. 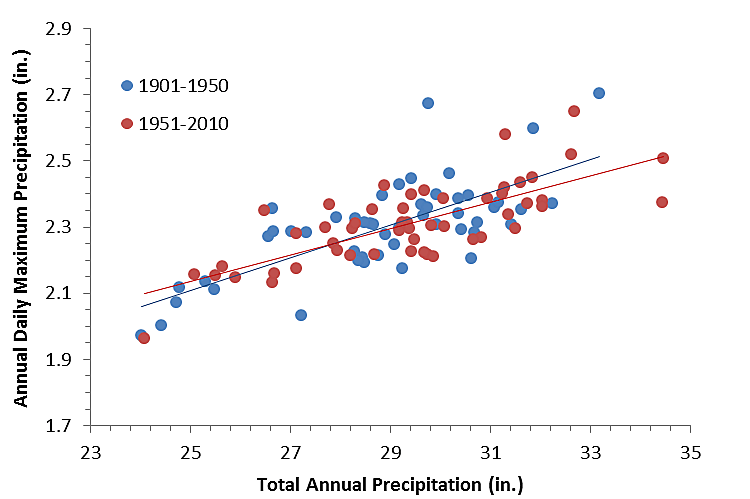 Let’s dig in a bit further. In Figure 3a (top) we plot the amount of precipitation falling during the wettest day of the year averaged across our study area. The data run from 1901-2010 and show a small, but statistically significant increase. Figure 3b (middle) shows the average total annual precipitation over the same period. Again, a slight and significant increase. And finally, Figure 3c (bottom) shows that the proportion of annual precipitation delivered during the wettest day of the year (Figure 3a divided by Figure 3b) exhibits no overall trend. In other words, the relationship between total rain and heavy rain remains unchanged. Each of these precipitation histories shows a good bit of temporal variation. If human-caused climate change is playing a role here, it is neither readily discernible nor resulting in unusual behavior.

From Figure 3a we can also see the actual increase in the amount of rainfall falling on the rainiest day of the year. It’s just a tad more than one-tenth of an inch. We submit that that isn’t “extreme,” “disproportionate” or even “consequential.” It’s just a very small number. To emphasize to the point of ridiculousness, hold your thumb and index finger a tenth of an inch apart and imagine the horrific damage that this increase in rain must cause!

In fact, if global warming has a hand in increasing annual precipitation totals, this would seem as a good thing (positive externality) considering the anticipated increase in water-use demand. According to a recent report from the Pacific Institute on our nation’s water-use trends:

We conclude that considerable progress has been made in managing the nation’s water — but the current pace is not likely to counter the demands of continued population and economic growth, climate change, and increasing tensions over scarce water resources. National water use remains high, and many freshwater systems are under stress from overuse. While there is reason to believe this may be changing, we must continue efforts to improve water-use efficiency in our homes, businesses, and on our nation’s farms.

All of this confirms that our original finding from 2004 continues to remain valid and thus our conclusions from that paper are worth repeating:

Our results support the contention that, where changes are significant, there is an increase in the amount of rain occurring on heavy rain days. However, our results provide no support for the argument that the increase in total annual rainfall observed across the USA is disproportionately occurring on the wettest days — a contention that may have arisen from methodological constraints rather than true changes in the nature of precipitation delivery…

Our results argue strongly that the increase in rainfall in the coterminous 48 states that has been observed in the last 100 years has not resulted in any systematic disproportion in the percentage of that increase allocated to the heaviest rain days.

But then, as is the case now, the actual amount of the increase is so small as to be operationally meaningless, even if it were caused by emissions of dreaded carbon dioxide (a hypothesis that is rather difficult to prove).  The same holds true for the large majority of other impacts from anthropogenic climate change—despite what you may read in the other media outlets.