I believe in the First Amendment, so I would never support legislation to restrict political speech or curtail the ability of people to petition the government.


That being said, I despise the corrupt Washington game of obtaining unearned wealth thanks to the sleazy interaction of lobbyists, politicians, bureaucrats, and interest groups.


So you can imagine my unfettered joy when reading about how this odious process is being curtailed by sequestration. Here are some cheerful details from story in Roll Call.

…sequester cuts…reflect not only Washington’s political paralysis but a bitter lobbying failure for K Street interests across the board. From university professors and scientists to cancer victims, defense contractors and federal workers, hundreds of advocacy, trade and labor groups have lobbied aggressively for months to head off the cuts. They’ve run ads, testified on Capitol Hill, staged demonstrations and hounded lawmakers, all to no avail. …the path forward could be a lobbying nightmare.

Reading the story, I recalled a Charles Addams cartoon from my childhood. Thanks to the magic of Al Gore’s Internet, I found it.


Slightly modified to capture my spirit of elation, here it is for you to enjoy. 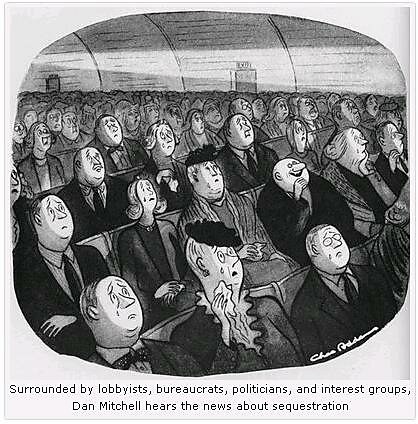 Except I like to think I’m a bit more prepossessing than the Uncle Fester character, but let’s not get hung up on details.


What matters is that sequestration was a much‐​needed and very welcome victory for taxpayers. Obama suffered a rare defeat, as did the cronyists who get rich by working the system.


To be sure, all that we’ve achieved is a tiny reduction in the growth of federal spending (the budget will be $2.4 trillion bigger in 10 years rather than $2.5 trillion bigger). But a journey of many trillions of dollars begins with a first step.