Hayek in the New York Times

Sunday’s New York Times magazine included an article by Adam Davidson of NPR, “Prime Time for Paul Ryan’s Guru (the One Who’s Not Ayn Rand).” I thought when I read it that if you’re going to call an economist “largely ignored,” you should at least mention that he won a Nobel Prize so readers could judge your claim. But incredibly, Davidson left that fact out. 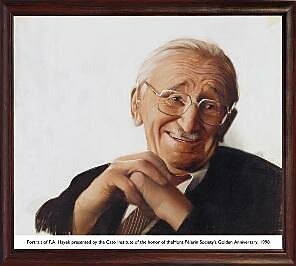 Now Richard Epstein has taken him to task at greater length and explains how much more sophisticated Hayek’s understanding of markets was than those of his contemporaries. Epstein writes:

But it is utterly inexcusable to overlook, as Davidson does, Hayek’s enduring influence. A year after the Road to Serfdom came out, Hayek published his 1945 masterpiece in the American Economics Review, “The Use of Knowledge in Society,” which has been cited over 8,600 times. In this short essay, Hayek explained how the price system allows widely dispersed individuals with different agendas and preferences to coordinate their behaviors in ways that move various goods and services to higher value uses.


Alas, Davidson’s dismissive account of Hayek does not mention even one of Hayek’s major contributions to weaning the United States and Great Britain from the vices of centralized planning. Thus Hayek’s 1940 contribution to the “Socialist Calculation” debate debunked the then‐​fashionable notion that master planners could achieve the economic nirvana of running a centralized economy in which they obtain whatever distribution of income they choose while simultaneously making sound allocations of both labor and capital, just like in Soviet Russia.


Hayek exposed this fool’s mission by stressing how no given individual or group could obtain and organize the needed information about supply and demand conditions throughout the economy.

Epstein goes on to examine the contributions that Hayek made to economists’ — and policymakers’ — understanding of planning, contracts, and competition. Too bad his article didn’t appear in the New York Times.


More on the Times’s misunderstandings of Hayek here and here. More on Epstein — plus George Soros and Bruce Caldwell — on Hayek here.