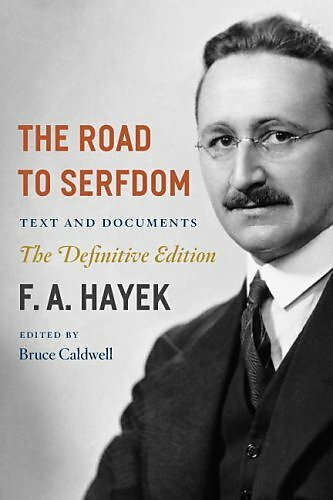 Bruce Caldwell, editor of The Collected Works of F. A. Hayek and Director of the Center for the History of Political Economy at Duke University, writes in today's Washington Post about the booming interest in Hayek:

Friedrich Hayek, Nobel-prize winning economist and well-known proponent of free markets, is having a big month. He was last seen rap-debating with John Maynard Keynes in the viral video above, (in which Hayek is portrayed as the sober voice of reason while Keynes overindulges at a party at the Fed). His 1944 book, "The Road to Serfdom," provided the theme for John Stossel's Fox Business News program on Valentine's Day.

Hayek, who died in 1992, is also reemerging as a bestselling author. A new edition of Hayek's seminal book, "The Road to Serfdom," was published in March 2007 by the University of Chicago Press as part of a series called "The Collected Works of F. A. Hayek," for which I serve as editor. For over a year-and-a-half, the book sold respectably, at a clip of about 600 copies a month.

But then, in November 2008, sales more than quadrupled, and they haven't slowed down since. What's more, the Kindle edition went on sale in late May 2009 and is now the best-selling book that the University of Chicago Press has offered in that format.

I reported on the rising sales of The Road to Serfdom last July. I argued that a Wall Street Journal op-ed by Dick Armey had sent sales jumping in February. Caldwell has a slightly different answer. After noting the general concern about President Obama's big-government program and the talk about socialized medicine, he writes:

But perhaps the biggest stimulus to sales was, well, the stimulus package. The macroeconomic analyses of John Maynard Keynes had gone quickly out of vogue in the 1970s, when a decade of stagflation delivered a death blow to the notion of Keynesian fine-tuning of the economy. But in early 2009, people were talking about Keynes again, and indeed the fiscal stimulus package, to the extent that it had a theoretical underpinning, would find one in Keynesian economics....

Because Keynes and Hayek actually did have a great debate over their rival theoretical models of a monetary economy in the early 1930s, just as the Slump of 1930 was turning into the Great Depression, it seemed natural for opponents of these policies to turn to Hayek's writings. (For those who are interested in this episode, I recommend a perusal of volume 9 of The Collected Works, Contra Keynes and Cambridge.)

Not only is "The Road to Serfdom" still relevant in our own time, it has something else going for it, too. It is actually readable. Anyone who has tried to master Keynes's "General Theory," or for that matter Hayek's rival title "Prices and Production," will find the going pretty tough.

Not so for "The Road to Serfdom," a book that was condensed by Reader's Digest in April 1945, just as the war in Europe was ending. Plus, "The Road to Serfdom" is, simply put, a great, evocative title. And with 10 percent unemployment, people certainly have more time to read it.

In the end, however, I think that the underlying reason for the sustained interest in Hayek's book is that it taps into a profound dissatisfaction in the public mind with the machinations of its government. Both Presidents Bush and Obama have presided over huge growth in the size of the federal government and in the size of the federal deficit, with little obvious effect on unemployment. Things seem out of control.

Whether it was the financial crisis, the stimulus package, Dick Armey's endorsement, or general fears about the growth of government, I'm glad to see people rediscovering F. A. Hayek. His ideas are a good foundation for a coherent and consistent response to the collectivist resurgence that now seems to be on the defensive.