A little over a year ago, I posted two different graphs (with the help of my colleague Charles Zakaib) that showed the growth of U.S. national security spending vs. that of other NATO allies over the last ten years. The data, based on the International Institute for Strategic Studies’ annual Military Balance, showed that U.S. taxpayers spend far more on our military, both as a share of total economic output, and on a per capita basis, than do any of our allies.

New data, for 2009, was made available in IISS’s Military Balance 2011, and the revised graphs are shown below. (Again, thanks to Charles for his help). As I suspected, the gap remains as wide as ever. In a few cases, it has grown wider. 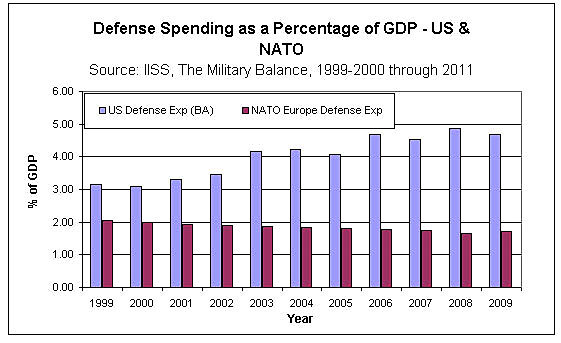 But all of these numbers are slightly misleading. The gap between what Americans spend on national security, broadly defined, and what everyone else pays, is actually wider.

For example, IISS’s graphs include only U.S. DoD budgetary authority, meaning the Pentagon’s base budget plus the costs of the wars. A more accurate “national defense” total includes nuclear weapons spending in the Department of Energy ($22.9 bn in 2009) and a catch-all category of “other” defense-related spending tucked away elsewhere in the federal budget totaling $7.25 bn. That adds another $95 a year to every American’s tax bill.

But wait, there’s more. A more accurate apples to apples comparison of all U.S. national security spending to that of other countries would at least include the Department of Veterans Affairs ($96.9 bn). Other countries (France, Germany, Italy, Spain, Greece, Belgium, and Portugal) include military pensions in their base budgets. Meanwhile, people in other countries would think it foolishly redundant to fund both a Department of Defense and a Department of Homeland Security, but Americans don’t (or at least Americans in Washington don’t). DHS funding in 2009 totaled $45.3 bn. All told, I estimate that the average American spent at least $2,644 on national security in 2009. The total was certainly higher in 2010 since the costs of the wars in Iraq and Afghanistan peaked in that year.

And in case you’re wondering, we spend at least 17 times as much as the average Chinese. Meanwhile, total U.S. security spending exceeds that of China, Russia, North Korea, Syria and Iran -- combined - by a factor of 3.3.

As the debate over federal spending drags through the dog days of summer and into the autumn, you will hear many people talk of our government’s solemn obligation to defend the citizens of this country from foreign threats. President Obama reaffirmed on Wednesday, in case anyone doubted it: “As Commander-in-Chief, I have no greater responsibility than protecting our national security, and I will never accept cuts that compromise our ability to defend our homeland or America’s interests around the world.” (my emphasis)

Surely some of the missions that our military is asked to accomplish actually do have that effect, but the definition of “America’s interests” has expanded so dramatically over the past few decades that it is practically devoid of any meaning.

Thus, you -- yes, you, American taxpayer -- will be told that our national interests around the world compel us to treat the Straits of Gibraltar and Malacca as though they were of equal importance to U.S. security as that of the Straits of Florida, the 90 or so miles that separates Key West from Cuba. The Caribbean might be an American lake, but so is the Mediterranean, the Baltic, and the Sea of Japan. Ominous threats made by Russia, China, or Iran against their neighbors are treated as synonymous to threats to harm Americans. Every ungoverned place, everywhere in the world, you will be told, poses a dire and imminent threat to your safety and security, hence our need to fix them all. (For why this generally isn’t true, see here.)

Throughout the supposed impending discussion of our military’s roles and missions, the role that other countries should play in keeping the seas open and free, defending themselves from potentially hostile neighbors, and preventing terrorists and other non-state actors from setting up shop in a nearby land, will rarely be entertained. For many people here in Washington, that is entirely by design: they don’t want other countries to defend themselves and their interests around the world. Better that you, the U.S. taxpayers, pay these costs. To do otherwise, to reduce U.S. military spending, and to pull back our forces from certain regions around the world, thus “leaving partners elsewhere in the world to manage for themselves as best as they can,” wrote Robert Haddick yesterday at the Small Wars Journal, would result in “regional arms races, increased nuclear and missile proliferation, and the establishment of new outposts around the world by America’s rising rivals.”

Haddick is not alone in predicting that the world will descend into complete and utter chaos if other countries were responsible for defending themselves and their interests, but all such assertions are precisely that: assertions, not fact. They rely on dire predictions of a horrible future, usually based on historical examples that are completely irrelevant in the modern age, to convince American taxpayers to pay more and more, and still more, on our military, so that others do not have to spend money on theirs. What’s more, they tend to ignore the current fiscal crisis, and are generally reluctant to explain what, if anything, they would cut. So far, fearmongering has worked splendidly to distract attention from the more important discussion of what we spend today, and what we should spend tomorrow. But the facts are incontrovertible: Americans now spend more on our military than at any time since World War II, and we spend far more on a per capita basis than anyone else in the world.

So Happy Tax Day, Americans! Our reassured allies thank you for paying to defend them and their interests. (And please now excuse them as they return to their other priorities.)

Cross-posted from The National Interest