The media are full of headlines about war, sexual assault, inequality, obesity, cancer risk, environmental destruction, economic crisis, and other disasters. It's enough to make people think that the world of their children and grandchildren will be worse than today's world.

But the real story, which rarely makes headlines, is that, to paraphrase Indur Goklany's book title, we are living longer, healthier, more comfortable lives on a cleaner and more peaceful planet. (Allister Heath summed up his argument in a cover story for the Spectator of London, without all the charts and tables.) Fortunately, beyond the headlines, more people do seem to be recognizing this.

The Cato Institute, for instance, has created an ever-expanding website on human progress, known simply as HumanProgress.org.

Here's Steven Pinker expanding on the information in his book The Better Angels of Our Nature: Why Violence Has Declined in Slate:

The world is not falling apart. The kinds of violence to which most people are vulnerable—homicide, rape, battering, child abuse—have been in steady decline in most of the world. Autocracy is giving way to democracy. Wars between states—by far the most destructive of all conflicts—are all but obsolete.

He has charts of the data in each of those areas. And here's Pinker at the Cato Institute discussing why people are so pessimistic when the real trends are so good:

Fraser Nelson, editor of the Spectator, writes that

2014 has been the best year ever – just as 2013 was, and just as 2015 will be. It is something that is, now, true every year but the point cannot be made enough. We’re living through a period of amazing progress – in medicine, prosperity, health and even conquering violence.

Nelson offers this brilliant graphic from the Lancet, a British medical journal: 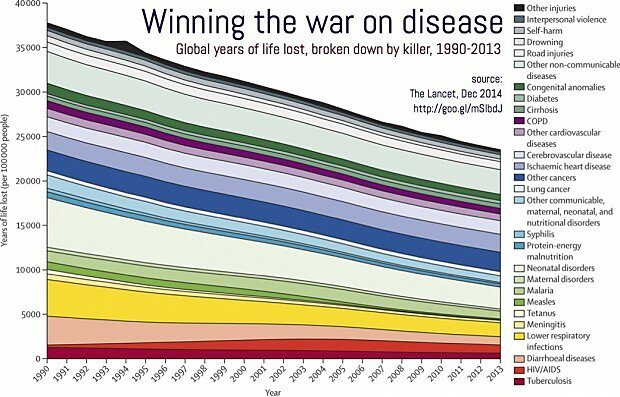 And just today we learn in a new report from the American Cancer Society that cancer rates have fallen 22 percent in two decades. At Spiked Online, editor Brendan O'Neill points out "10 Kickass Things Humanity Did in 2014."

The “good old days” are a figment of our imagination. Life--here, there, everywhere--has never been better than it is today. Our lives have certainly never been longer: Life expectancy in the U.S. is now 78.8 years, up from 47.3 years in 1900. We are also healthier by almost any imaginable measure, whether we mean that literally, by looking at health indices, or more expansively, by looking at a range of living-standard and social measures (teen pregnancy rates, smoking, air-conditioning penetration, water and air quality, take your pick).

I’ll concede, very grudgingly, that all this whining can be a good thing. As Yuval Noah Harari, the author of Sapiens: A Brief History of Humankind, has written, we’re hard-wired to be disgruntled. It’s the only way we achieve progress. Evolution requires us to demand more and better, all the time.

So on Monday let's go back to demanding more and better. But for tonight, Happy New Year!