Net primary production (NPP) represents the net carbon that is fixed (sequestered) by a given plant community or ecosystem. It is the combined product of climatic, geochemical, ecological, and human effects. In recent years, many have expressed concerns that global terrestrial NPP should be falling due to the many real (and imagined) assaults on Earth's vegetation that have occurred over the past several decades—including wildfires, disease, pest outbreaks, and deforestation, as well as overly-hyped changes in temperature and precipitation.

The second “National Assessment” of the effects of climate change on the United States warns that rising temperatures will necessarily result in the reduced productivity of major crops, such as corn and soybeans, and that crops and livestock will be “increasingly challenged.” Looking to the future, the National Assessment suggests that the situation will only get worse, unless drastic steps are taken to reduce the ongoing rise in the air's CO2 content (e.g., scaling back on the use of fossil fuels that, when burned, produce water and CO2).

But is this really the case? If growing crops are increasingly affected, damage should also be showing up in the global ecosystem. Is the productivity of the biosphere in decline?

In a word, no! Observational data indicate that just the opposite is occurring (see, for example, the many studies reviewed previously on this topic here). Rather than withering away, biospheric productivity is increasing, thanks in large measure to the growth-enhancing, water-saving, and stress-ameliorating benefits of atmospheric CO2 enrichment.

The latest study to confirm as much comes from the research team of Li et al. (2017). Working with a total of 2,196 globally-distributed databases containing observations of NPP, as well as the five environmental variables thought to most impact NPP trends (precipitation, air temperature, leaf area index, fraction of photosynthetically active radiation, and atmospheric CO2 concentration), Li et al. analyzed the spatiotemporal patterns of global NPP over the past half century (1961–2010).

Results of their analysis are depicted in the figure below, which shows that global NPP increased significantly from 54.95 Pg C yr-1 in 1961 to 66.75 Pg C yr-1 in 2010 (Figure 1a). That represents a linear increase of 21.5 percent in the last half-century. In quantifying the relative contribution of each of the five variables impacting NPP trends (Figure 1b), Li et al. report that “atmospheric CO2 concentration was found to be the dominant factor that controlled the interannual variability and to be the major contribution (45.3%) of global NPP.” Leaf area index, which is also enhanced by increasing atmospheric carbon dioxide, was the second most important factor, contributing an additional 21.8 percent, followed by climate change (precipitation and air temperature together) and the fraction of photosynthetically active radiation, which accounted for the remaining 18.3 and 14.6 percent increase in NPP, respectively. Li et al. also report that the vast majority of the observed rise in NPP occurred in the middle and high latitude regions, with 61.1 percent of the increase occurring between 30 and 60 degrees of latitude and 26.4 percent between 60 and 90 degrees of latitude of both hemispheres (see Figure 1c). 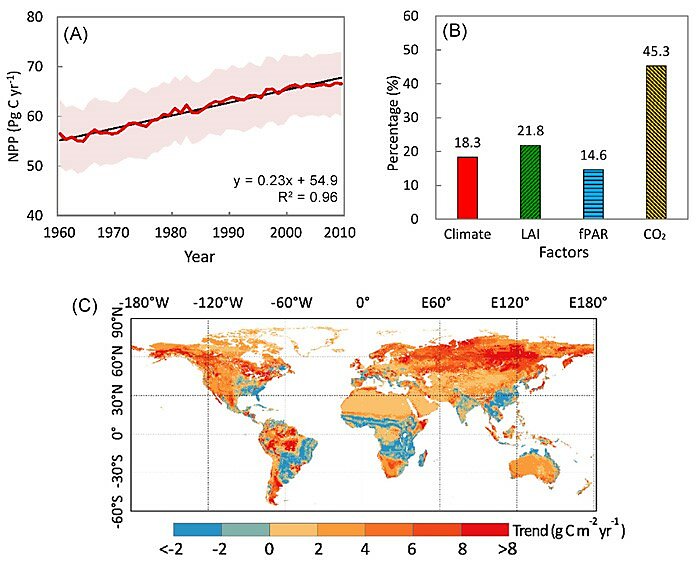 Figure 1. (A) Annual variations in global NPP between 1961 and 2010. (B) Changes in NPP in recent decades that resulted from multiple environmental factors including climate, leaf area index (LAI), fraction of photosynthetically active radiation (fPAR), and CO2, and the relative contribution rate (%) of each factor during the study period. (C) Spatial distribution of the trend in NPP during the period 1961–2010. Source: Li et al. (2017).

The observed increase in global NPP over the past five decades is quite an accomplishment for the terrestrial biosphere, especially when one considers all the negative stories—nary a day goes by without notice of some environmental disaster (human- or naturally-caused) occurring somewhere in the world and wreaking havoc on nature. Since 1980, the Earth has experienced three of the warmest decades in the modern instrumental temperature record, has weathered a handful of intense and persistent El Niño events, and suffered large-scale deforestation, "unprecedented" forest fires, disease and pest outbreaks, and episodes of persistent, widespread, and severe droughts and floods. Yet, despite each of these factors, and every other possible negative influence that has occurred over the past half century, terrestrial net primary productivity has increased by 21.5 percent! And it has done so largely because of the ongoing rise in atmospheric CO2. How ironic it is, therefore, that the supposed chief culprit behind the many real (and imagined) assaults on Earth’s vegetation—rising atmospheric CO2—has been found to be the primary cause of an ever-greener planet.