The Growing Wealth Gap? Fortune Makes up the Numbers

The latest Fortune magazine contains a page on “The Growing Wealth Gap.” The author, Doris Burke, says, “here are some of the facts.” But they aren’t facts, or even official estimates.
The opening line is, “The top 1% owns 36% of all wealth” as of 2009. Yet the latest figure was 33.8 percent in the Arthur Kennickell’s report on the Federal Reserve’s triennial Survey of Consumer Finances (SCF) and that was for 2007, not 2009. There will never be an estimate for 2009 (the next one is for 2010), so something is obviously fishy. 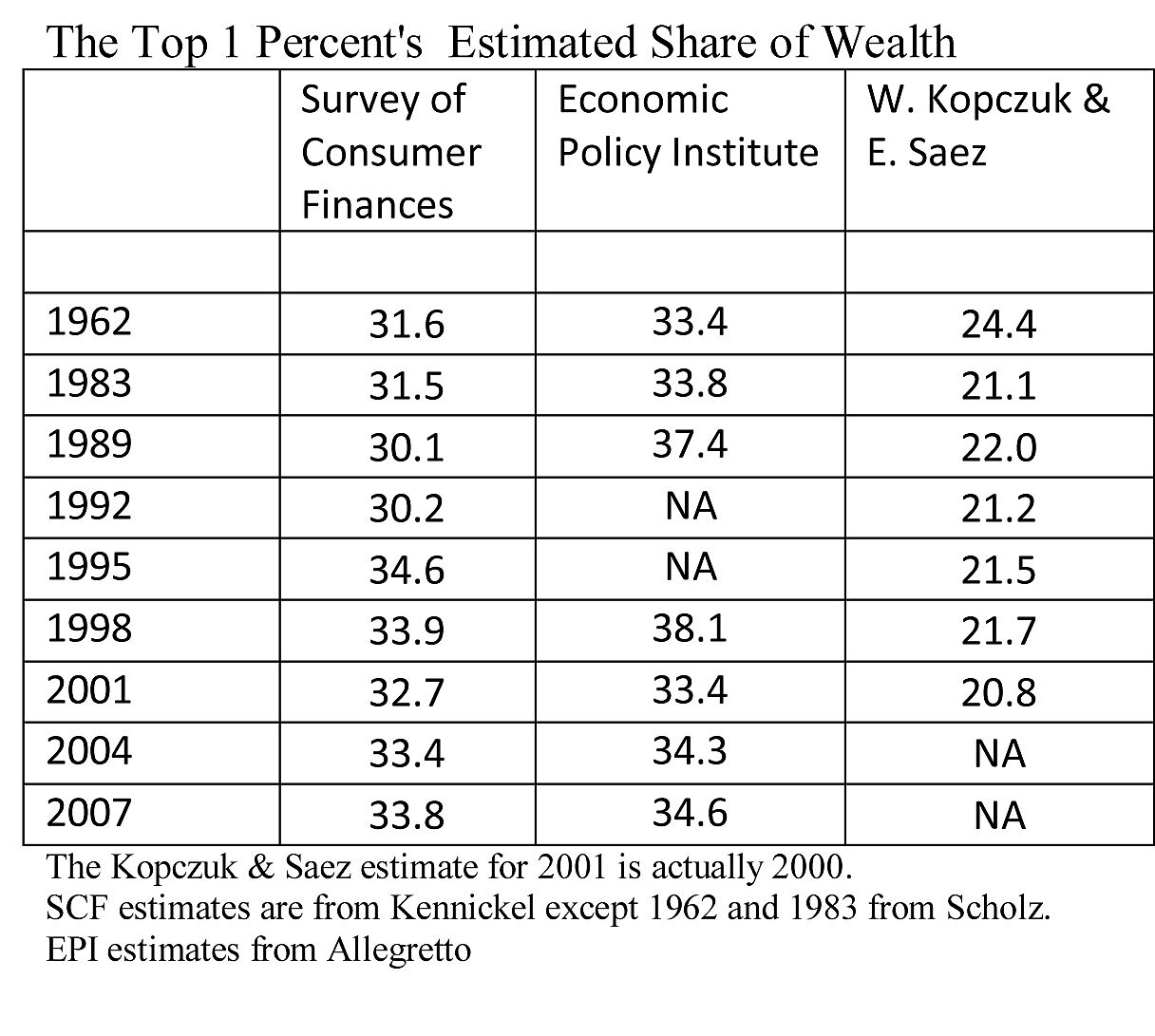 
So where did Fortune’s estimate of 36% (actually 35.6%) come from? The author cites the left‐​of‐​center Economic Policy Institute (EPI), which turns out to mean a paper by Sylvia Allegretto. (Fortune’s more amateurish sources include Deloitte and somebody named Mark Kroll). The EPI estimates, shown in the second column of the table, purport to be from the SCF but are simply mysterious. The dates were supposedly “chosen based on the data available,” but there is no data for 2009 while there is data for the strangely missing years of 1992 and 1995. Ironically, these enigmatic EPI estimates show the top 1 percent’s share of wealth declining since 1989 or 1998, which is not the impression that the EPI or Fortune hope to convey.


To fabricate a number for 2009, Ms. Allegretto relies on her own “author’s analysis” of an “unpublished analysis” by Ed Wolff “prepared for” the EPI but not on the website of Wolff or the EPI. Allegretto’s inexplicable analysis of Wolff’’s invisible analysis supposedly “updates” the official figures “based on changes in asset prices between 2007 and 2009 using Federal Reserve Flow of Funds data.” But changes in the flow of funds estimates are also rough and incomparable with the SCF, partly because they combine households with nonprofit organizations and unincorporated businesses.


Financial assets of households and nonprofits were worth $78.6 trillion at the end of 2007, according to the flow of funds, while homes were worth only $20.9 trillion and half of that was mortgaged. Allegretto implies that the top 1 percent’s share rose in 2009 because the flow of funds’ estimated 18 percent drop in the value of homes from 2007 to 2009 supposedly exceeded the drop in the value of assets that dominate the top 1 percent’s assets in 2007 – such as unincorporated business (whose value fell by 28.7 percent) and stocks (down 23.5 percent). Even if the flow of funds data confirmed the allegedly greater drop in home values than in, say, stocks, Allegretto’s own figures (her Table 6) show that stocks accounted for 30.8 percent of the wealth of the bottom 95 percent, but only 19.2 percent for the top 1 percent. In any case, home equity is too modest fraction of total wealth to drive the top 1 percent’s share upward at a time when stocks and small businesses were crashing. There is ample evidence (e.g., my forthcoming Wall Street Journal article updating the “new” CBO estimates to 2009) that recessions always drive down the top 1 percent’s share of both wealth and income. For those who obsess over the top 1 percent’s share, including the CBO and the Occupy Wall Street crowd, deep recessions should properly be celebrated as a wonderful decline in “inequality” by their twisted definition.