Is Greece’s Fiscal Crisis Caused by too Much Spending or too Little Revenue?

It’s been a rough couple of weeks for Greece, which has been battered by rumors of government default. Interest rates have been climbing, as investors are nervous about state finances, and the country’s debt rating has been downgraded.


Not surprisingly, Greek politicians are dealing with the crisis in large part by further increasing the tax burden. One particularly horrible idea is a 90 percent tax on bank bonus payments. I don’t know if lawmakers in Athens have heard of the Laffer Curve, but they’re about to get a real‐​world lesson that will teach them how punitive tax rates lead to less revenue.


For those who wonder how Greece got into this mess, here’s a quick chart I put together, based on OECD fiscal data. Don’t be surprised if America has a similar chart in about 10 years. 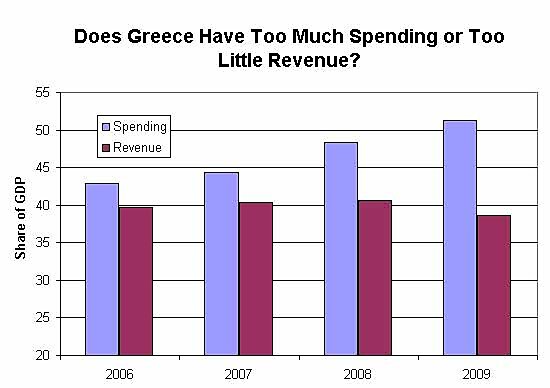