Last year, officials at the Univerity of New Hampshire complained bitterly about legislative budget cuts. UNH President Mark Huddleson, who earns more than three times the salary of New Hamphire’s governor at over $330,000 a year, called the cuts “a devastating and historic loss of $31 million,” which is just under six percent of UNH’s $583.5 operating budget. The wailing and gnashing of teeth made the recent revelation that UNH was paying a New York City marketing firm between $91,400 and $108,200 to redesign the school’s logo particularly surprising.

University officials felt that the school’s current logo, which features a clock tower from a building on campus, was not competitive enough in the 21st century so they paid the NYC firm to produce three proposed logos. Apparently this is what $100,000 gets you:

Unsurprisingly, a number of students and alumni are not happy with any of the proposed designs and some created a Facebook page to organize the opposition:

The Facebook page — UNH Students Against the Change of the Thompson Hall Logo — was created May 13 and had 572 likes as of Tuesday evening. Not all posts are supportive of Thompson Hall, but most are critical of the three finalists proposed by the design team.


“I think that a bunch of first graders could have come up with better designs! These are awful!” wrote Julie Glover, a 1983 UNH graduate.


Scotty Arsenault said the university should hire a local artist. “You’re paying a ridiculous amount for insultingly mediocre designs. Don’t limit yourselves to this shield/​crest concept,” he wrote.

Grant Bosse, the editor of New Hampshire Watchdog (and my former colleague at the Josiah Bartlett Center), responded by creating a public Facebook page to crowdsource a new logo. Within 24 hours, there are already several submissions that at least as good as the $100,000 logos, including these: 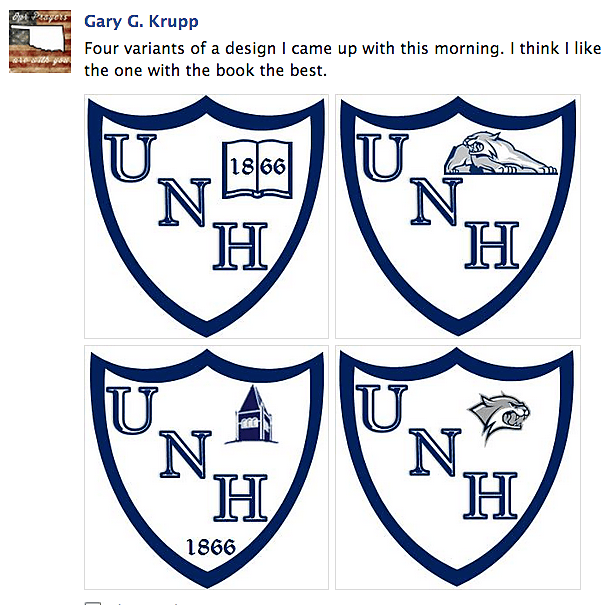 Not only is crowdsourcing free, it’s likely to create a better logo from an involved community that is clearly more invested in the product.