The situation is grim. Dangerous foreigners are streaming into the United States, killing and abducting innocent Americans. They depress the wages of American workers and hurt American businesses. Something must be done about these invaders!


Is this another warning from Donald Trump? Another column by Sean Hannity? The conclusion of another paper from the Center for Immigration Studies?


Nope, it’s a paraphrase of warnings from politicians, unions, and major newspapers from a century ago, about the dangers of Chinese immigrants and other “Asiatics,” as well as the businesses they opened, especially “chop suey houses.” These warnings would be comical if they weren’t so abhorrent.


Consider this, from the Chicago Tribune:

More than 300 Chicago white girls have sacrificed themselves to the influence of the chop suey “joints” during the last year, according to police statistics. … Vanity and the desire for showy clothes led to their downfall, it is declared. It was accomplished only after they smoked and drank in the chop suey restaurants and permitted themselves to be hypnotized by the dreamy, seductive music that is always on tap.

Or this, from the Mixer and Server, a publication of the Cooks’ and Waiters’ Union, an ancestor of today’s UNITE HERE:

View this matter from every angle, without heat or racial prejudice, and the fact stares us in the face that there is a conflict between the American wage‐​earner and the workers or employers from the Orient. Our Government has been compelled to close its doors to Asiatics in recognition of this fact.

Or this resolution from one of the forerunners of the AFL-CIO:

WHEREAS the evils arising from the employment of white women and girls in establishments owned or controlled by Chinese and Japanese constitute, both morally and economically, a serious menace to society; therefore be it


RESOLVED, That the American Federation of Labor be requested to pledge its best endeavors to secure the passage of a law prohibiting the employment of white women or girls in all such establishments. 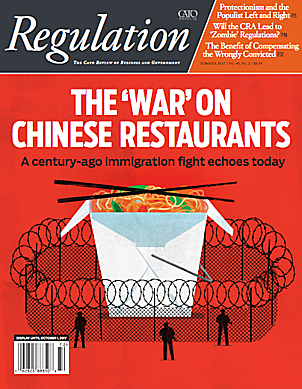 Those quotations are from “The ‘War’ Against Chinese Restaurants,” a paper by UC‐​Davis law professor Gabriel J. “Jack” Chin and attorney John Ormonde that is the cover story of the summer issue of Cato’s Regulation. (A longer version of the paper is forthcoming in the Duke Law Journal.) The article is filled with other shocking warnings, as well as inspiring responses from that era’s defenders of mobility and economic freedom.


The Chinese Restaurant War was driven by nationalism and bigotry. That war echoes today, of course, as Chin and Ormonde note in their conclusion:

Back in 2015, Steve Bannon, now a top White House official, had a special guest on his radio program: Donald J. Trump. Trump spoke of his concern about immigration but added, “You know, we have to keep our talented people in this country.” Bannon disagreed, saying: “When two‐​thirds or three‐​quarters of the CEOs in Silicon Valley are from South Asia or from Asia, I think.… A country is more than an economy. We’re a civic society.” In saying this, Bannon wildly overestimated the percentage of Silicon Valley professionals of Asian descent. More importantly, he repeated an old belief: that only white citizens should be a part of this nation’s civic society.