Government Shutdown Theater: Republicans Should Not Surrender to Obama’s Blackmail

Notwithstanding the landslide rejection of Obama and his policies in the mid-term election, I don't think this will produce big changes in policy over the next two years.

Simply stated, supporters of limited government do not have the votes to override presidential vetoes, so there's no plausible strategy for achieving meaningful tax reform or genuine entitlement reform.

But that doesn't mean that there won't be important fiscal policy battles. I'm especially worried about whether we can hold on to the modest fiscal restraint (and sequester enforcement) we achieved as part of the 2011 debt limit fight. 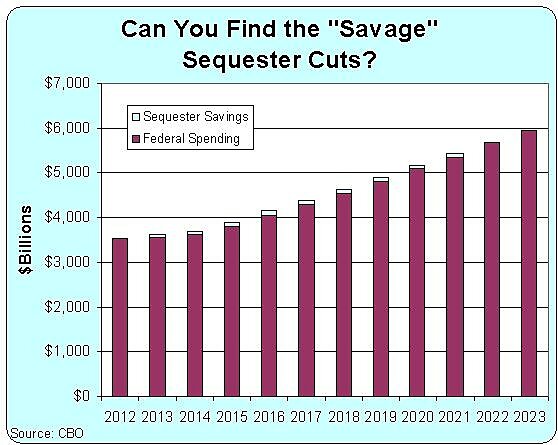 Part of that victory was already negotiated away as part of the Ryan-Murray budget deal, to be sure, but there are still remaining budget caps that limit how fast politicians can increase so-called discretionary spending.

I think that's too much spending, but the interest groups, lobbyists, cronyists, politicians, bureaucrats, and other insiders in Washington would like much bigger increases. And you won't be surprised to learn that the Obama Administration also wants to bust the spending caps.

This is why I'm very worried that some Republicans are undercutting their negotiating position by saying that there will be no government shutdowns.

Let me explain how these issues are connected. At some point next year, Republicans on Capitol Hill will be responsible for putting together spending bills for the following fiscal year. They presumably (or am I being too optimistic?) will put together budget bills that comply with the existing spending caps.

Obama will then say he will veto such legislation and demand that Republicans unilaterally surrender by enacting bigger spending increases and also gutting sequestration. The GOP will then have two options:

A) they can surrender.

B) they can continue to send the President spending bills that comply with the law.

But if they go with option B and the President uses his veto pen, then the government shuts down. And even though the shutdown only occurs because the President wants to renege on the deal he signed in 2011, Republicans are afraid they'll get blamed.

The Washington Post reports on this fearful attitude, citing the anti-shutdown perspective of the incoming Senate Majority Leader.

A day after he won reelection and Republicans retook the Senate, Sen. Mitch McConnell (R-Ky.) left no doubt... “Let me make it clear: There will be no government shutdowns...,” McConnell said in a valedictory news conference in Louisville.

But that view irks some lawmakers who worry Obama will then have a blank check.

The first battle may revolve around immigration, but - as noted above - I'm more focused on fiscal fights.

But McConnell could be tripped up by the same conservative forces that have undercut Boehner since he became speaker in 2011. The issue this time is Obama’s expected executive action to overhaul the nation’s immigration system. ...conservatives...have urged McConnell and Boehner to fight back by allowing only a short-term budget bill that would keep government agencies open until early next year. These conservatives believe that once Republicans hold both chambers of Congress next year, they can force Obama to accept a budget bill that would prohibit him from implementing his executive order on immigration.

At this point in the article, the reporter, Paul Kane, engages in some anti-factual editorializing.

...the days of brinkmanship could return with a vengeance, and the government could once again be shut down. That could provide a devastating blow to Republicans, hurting their chance to win back the White House and hold on to their relatively slim Senate majority in 2016.

Huh?!? Republicans just won a landslide, so why are we supposed to believe last year's shutdown was "a devastating blow"?

Mr. Kane also refers to a shutdown later in the article as a "fiscal calamity" even though he shows no evidence (because there wasn't any) that government shutdowns cause any damage.

But there is at least one person who is convinced by this narrative. And that person, Senator McConnell, is preemptively trying to convince other GOP Senators to give Obama the upper hand in any fiscal negotiations.

McConnell’s advisers are worried enough that by Friday evening they were circulating a memo showing how damaging last year’s shutdown was to the Republican Party — an effort designed to counter conservatives who point to this month’s triumphant election as proof that the shutdown did little damage. ...The memo showed that in Gallup polling from late 2012 until this month, ...Republicans held steady just a couple of points lower through 2012 and most of 2013 — until the 16-day shutdown of the federal government in October 2013. In just a few weeks, the McConnell chart shows, Republican favorability plummeted 10 points. It has taken a year for it to climb back to where it was before the shutdown.

But who cares about "favorability" ratings. The poll that should really matter to Republicans is the one that takes place on election day.

And that seemed to be good news for the GOP.

Here's some of what I wrote in my post about lessons that could be learned from the 2014 elections.

Back in 2011, I explained that Republicans could play hard ball, largely based on what really happened during the 1995 government shutdown. And in 2013, I again defended a shutdown, pointing out that voters probably wouldn’t even notice that some government offices were closed, but they would remember that the GOP was branding itself as the anti-Obamacare party. The establishment, by contrast, thought the shutdown was a disaster for Republicans. ...many...Republicans felt the same way, excoriating Senator Cruz and others who wanted a line-in-the-sand fight over government-run healthcare. The moral of the story isn’t that shutdowns necessarily are politically desirable, but rather that it’s very important for a political party to find visible ways of linking itself to popular causes (such as ending Obamacare, fighting big government, etc).

At least one person agrees with me. Jeffrey Lord, writing for the American Spectator, points out the GOP establishment was wrong about the political impact of the 2013 government shutdown.

The whole event was giving prominent Republicans in and out of office the political willies. ...Republican senators, congressmen, governors, ex-office holders, potential presidential candidates, lobbyists and pundits...were spreading the word. That word? ...it was some version of curtains for the GOP. The party would be toast. ...they all got it wrong. Not just wrong, but Big Time Wrong. A week ago the Republican Party — barely a year away from the government shut down these folks were bewailing in various terms as bad strategy that “will lose more” for Republicans than Democrats — won a blowout election. ...Will Republicans learn anything here? ...Do you think Mitch McConnell makes the connection between the government shutdown of 2013 and the fact that he is about to become Senate Majority Leader?

To be fair, we don't know what would have happened if there wasn't a shutdown in 2013, so maybe the GOP still would have taken the Senate. 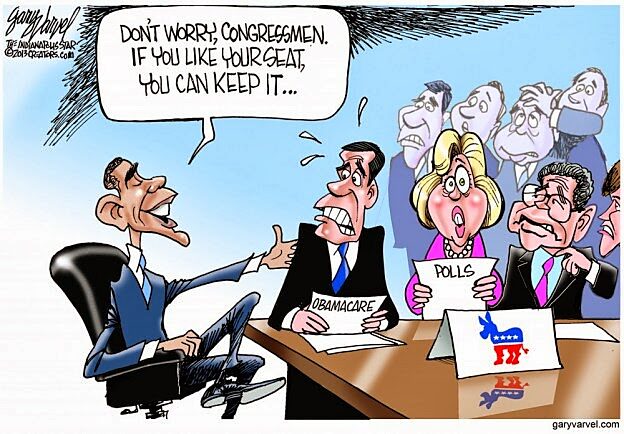 But there's also no doubt that the GOP benefited by having a big public fight about Obamacare. Voters didn't remember the shutdown, but they did remember that Republicans were against the President's government-run healthcare scheme and they remembered that Democrats were for it.

I have no idea whether that made a difference in one Senate race of six Senate races, but Obamacare clearly was an albatross for Democrats.

In closing, I want to point out that there are limits to a shutdown strategy.

Picking a fight (or, more accurately, refusing to surrender to Obama) in 2015 is almost surely a winning strategy. But having the same fight in October of 2016 probably wouldn't be very smart, particularly since the establishment press would do everything possible to spin the fight in ways that advance Hillary Clinton (or some other left-leaning presidential nominee).

In other words, context matters. Pick the right fight.

But the bottom line is that Republicans - assuming they don't intend to acquiesce on every single issue - must be prepared to let Obama veto spending bills and shut down the government.

Returning to the American Spectator story, Ted Cruz may not be very popular with some of his colleagues, but I think he made an unassailable point about what happens if the GOP unilaterally disarms.

Cruz...asked them for their alternative. Cruz paused, then said that the response he got was “the sound of crickets chirping.”

P.S. One reason why Republicans are skittish about shutdowns is that they think they last the 1995 fight with Bill Clinton. But if you lived through that battle (or if you look at contemporaneous news reports), it's clear the Republicans had the upper hand.

P.P.S. Here are the five lessons I shared immediately after the 2013 shutdown fight.