Appropriators — often referred to as the “third party” in Washington — exist to do one thing: spend other people’s money. Getting appropriators to agree to place any sort of limit themselves is a plus.


However, it’s hard to get excited about spending $20 billion less than the president. As the following chart shows, discretionary outlays have soared in the past decade: 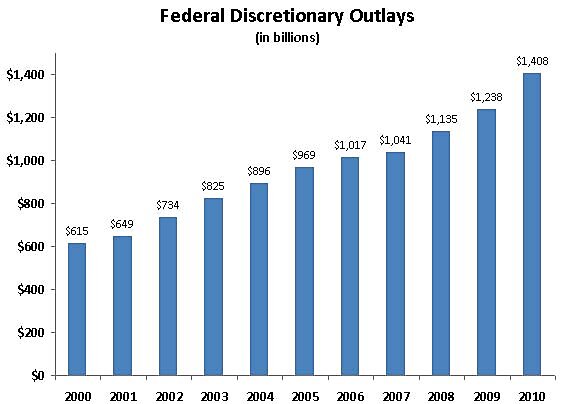 With three months still to go in the current budget year, the federal deficit has already hit the trillion dollar mark. By year’s end the government will have borrowed about $1.4 trillion. It’s like the entire discretionary budget — defense and hundreds of other activities — are all financed by borrowing from the next generation.


Republicans apparently want agitated voters to see this gesture as evidence that the party is serious about out‐​of‐​control spending and deficits. But capping spending at the already exorbitant levels that Republicans helped reach isn’t exactly a big reform. Instead, Republicans need to propose the elimination of entire agencies and major programs for them to be taken seriously as a party willing to confront the nation’s looming financial crisis.