We hear that there is looming banana crisis in Costa Rica—the world’s 2nd leading exporter of the fruit—as this year’s crop is being threatened by an infestation of mealybugs, scale insects, and fungal infection.


Petulance, plagues, disease? It must be climate change, of course!


The Director of the Costa Rican Agriculture and Livestock Ministry’s State Phytosanitary Services, Magda González, told the San José Tico Times, “Climate change, by affecting temperature, favors the conditions under which [the insects] reproduce.” González estimated that the rising temperature and concomitant changes in precipitation patterns could shorten the reproduction cycle of the insect pests by a third. “I can tell you with near certainty that climate change is behind these pests.”


But there’s a method to Gonzalez’ madness. In it’s recent Warsaw confab on climate change, the UN has made it abundantly clear that one of its endgames is compelling “reparations” for climate damages cost by dreaded emissions of carbon dioxide. The more that poorer nations make these claims—however fatuously—the more momentum builds to extract capital from me and thee.


May we humbly suggest that calling Ms. Gonzalez’ claim “fatuous” is really being too nice. She should actually propose compensating the United States for all the excess bananas that are associated with warmer temperatures.


Figure 1 shows banana production in Costa Rica from 1961–2011. Figure 2 shows the temperatures there over the same period. We hate to burst anyone’s climate‐​change‐​is bad‐​bubble, but the correlation between these two variables is positive. That is, higher temperatures are associated with greater banana production (and yield). 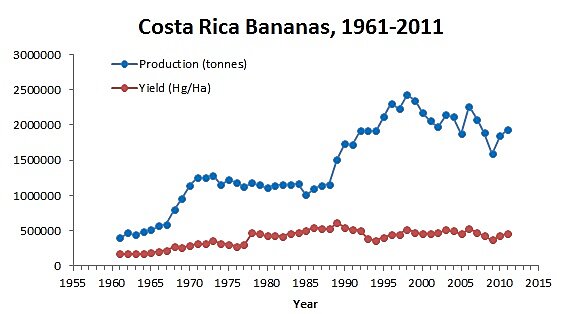 
And as far as precipitation goes, the trends down there are all over the place—some stations show trends towards increasing rainfall amounts, while others nearby, towards decreasing amounts. The geography of the country, along with all sorts of external influences including tropical cyclone activity, sea surface temperature patterns, and larger‐​scale circulation systems in both the Pacific and Atlantic makes for a very complex pattern precipitation variability, both temporally and spatially, across Costa Rica. It is virtually impossible to assess the influence of recent human‐​caused climate change in such a complicated and highly variable natural system.


So you have a situation where annual precipitation variability is high and where warmer conditions seem to be associated with greater banana yields.


While it is probably not out completely out of the question that some sort of weather influence may, in part, play some role in the current affliction of the Costa Rica banana crop, to implicate human‐​caused global warming, you’d have to have gone completely…, well, you know.


But climate policy has always functioned best in a data‐​free environment, about the only way a cheap hustle like that of the Costa Rican National Phytosanitariest merits any attention at all.