The northern end of the Antarctic Peninsula is Warming Fast
-- BBC, August 23, 2012

No, it’s not. When BBC reported this, the Northern Peninsula hadn’t on average warmed a lick in thirty years.

In the 1990s and early part of this century, news reports about the dramatic warming of the northernmost Antarctic Peninsula—the tip of the 800-mile dagger pointed at the heart of Tierra del Fuego—were a common staple. And, while scientists wouldn’t write this in the literature, they were happy to blame it on dreaded carbon dioxide on television, as paleoclimatologist Robert Mulvaney did in the 2012 BBC feature.

The story has become increasingly curious. Marc Oliva of the University of Lisbon recently examined the high quality weather stations over the northern peninsula and the nearby South Shetland Islands. There is a decent warming trend, averaging around 1.5⁰C, from the beginning of the data in 1957 (the year when Antarctica was instrumented as a part of the International Geophysical Year) to the early 1980s, or about a quarter-century. That’s a warming, if it continued (and surely it would!), of 6⁰C per century. The warming that gets huge attention is actually only from a single station, Faraday (now renamed Vernadsky), which warmed roughly 2.5⁰C during the same period. If that continued (and surely it would!), that’s 10⁰C/century!

Oliva et al. wrote that the “Faraday/Vernadsky warming trend is an extreme case, circa twice those of the long-term records from other parts of the AP.” The variability in the Faraday/Vernadsky record is also huge—around three times as much as other stations in the area, probably because it is often at the edge of the sea-ice.

Satellite data show that sea-ice around Antarctica grew from when satellite data began in 1978 through early 2016, especially after 2000. Last April, the satellite’s sensor started sending back bizarre data. The University of Illinois people who archive this at Cryosphere Today have been using backup sensors that are giving completely strange stuff, such as a huge crash in Antarctic sea ice—larger and faster than anything in the record—followed by an even larger gain. That seems impossible, so recent sea ice data are just plain suspect.

The data shown below are from Olivia et al. What is obvious is since the early 1980s—over three decades ago—there’s no net change of which to speak. And if you want to be picky about it, there a net decline in temperature that begins in the late 1990s, the same time the infamous “hiatus” in global warming started.

Last year, John Turner published a paper in Nature providing evidence that the lack of recent warming is consistent with natural variability as well as the previous warming. To wit:

Therefore all of these [nearby ice-core] studies suggest that the rapid warming on the AP [Antarctic Peninsula] since the 1950s and the subsequent cooling are both within the bounds of the natural decadal-scale variability of the region. 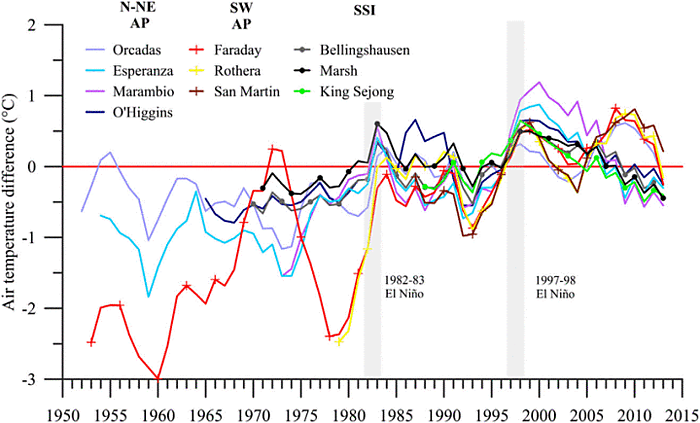 But that’s not what the public hears.