Germany’s Not a Good Role Model…Except When Compared to the Profligate U.S.

Last week in New York City, during my Intelligence Squared debate about stimulus, I pointed out that Germany is doing better than the United States and explained that they largely avoided any Bush/​Obama Keynesian spending binges.


One of my opponents disagreed and asserted that I was wrong. Germany, this person argued, was dong better because it was more Keynesian thanks to “automatic stabilizers” that resulted in big spending increases.


This claim was made with such certainty that I wondered if I made a mistake.


Well, we were both right about Germany doing better. In the past few years, it has been enjoying yearly growth of about 3.5 percent while growth in the United States has remained below 3 percent.


But who was right about the key issue of whether Germany has been more Keynesian? At first, I was going to be lazy and not bother combing the data. But then I got motivated after reading an excellent post about Germany’s pro‐​growth reforms, written for National Review by Veronique de Rugy of the Mercatus Center. 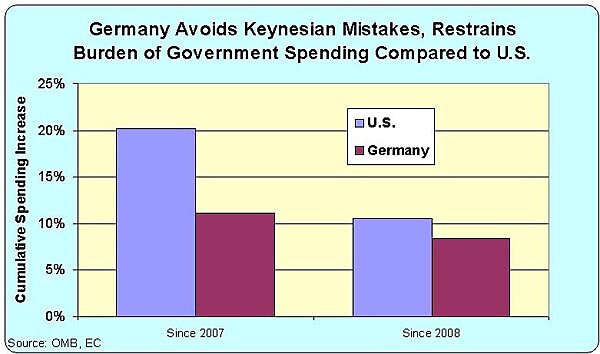 
In every single case, the burden of government spending grew faster in the United States from 2007 to 2011.


This does not mean Germany is a role model. Government spending in Germany is far too high and it continues to grow. All we can say is that Germany is not going in the wrong direction as fast as the United States.


Oh, I suppose we also can say that I was right and my opponent was wrong. The United States has been more Keynesian than Germany.


Speaking of Germany, I combed my archives and found only one post that said anything nice about German politicians.


So even though Veronique is correct about some positive changes, the Germans have a long way to go.