Via the Identity Project’s “Papers, Please” web site, and despite my colleague David Rittgers’ excellent post from yesterday, I note last week’s utterly damning Government Accountability Office report on the SPOT program. “SPOT” stands for “Screening Passengers by Observation Techniques.” In the program “BDO’s,” or “Behavior Detection Officers,” observe travelers in airports, pulling them out of line if a secret list of behaviors signal that they’re a likely threat.

TSA deployed SPOT nationwide before first determining whether there was a scientifically valid basis for using behavior and appearance indicators as a means for reliably identifying passengers as potential threats in airports. … TSA state[s] that no other large‐​scale U.S. or international screening program incorporating behavior‐ and appearance‐​based indicators has ever been rigorously scientifically validated. While TSA deployed SPOT on the basis of some risk‐​related factors, such as threat information and airport passenger volume, it did not use a comprehensive risk assessment to guide its strategy of selectively deploying SPOT to 161 of the nation’s 457 TSA‐​regulated airports. TSA also expanded the SPOT program over the last 3 years without the benefit of a cost‐​benefit analysis of SPOT.

The Israeli airline El Al uses behavior detection, counters the TSA—as did DHS Secretary Janet Napolitano when I asked her about this report at a meeting of the DHS Privacy Committee Tuesday.


The GAO report notes that El Al’s processes, which are different from the TSA’s, have not been scientifically validated. As of 2008, El Al had 34 aircraft, operating out of one hub airport, Ben‐​Gurion International. There are 457 TSA‐​regulated airports in the United States. In 2008, El Al had passenger boardings of about 3.6 million; one U.S. airline, Southwest, flew about 102 million passengers that year.


From late May 2004 through August 2008, BDOs referred 152,000 travelers to secondary inspection. Of those, TSA agents referred 14,000 people to law enforcement, which resulted in approximately 1,100 arrests. TSA officials did not identify any direct links to terrorism or any threat to aviation in these cases. GAO noted its inability to determine if this is a better arrest rate than would occur under random screenings. 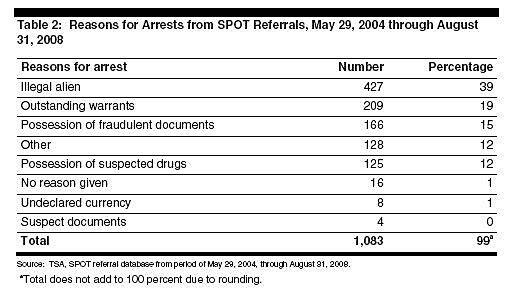 GAO also determined that at least 16 individuals allegedly involved in terrorism plots have moved at least 23 different times through eight airports where the SPOT program has been implemented. SPOT caught none of them.


The Government Accountability Office is a master of understatement, leaving conclusions for readers to draw. Mine is that the $1.2 billion in planned spending on the program over the next five years will be a wasteful producer of civil liberties violations.