The Gallup poll released Monday shows the public’s conservatism at a high‐​water mark. Some 40 percent of Americans call themselves conservative, compared with 36 percent who self‐​describe as moderates and 20 percent as liberals.

Gallup often asks people how they describe themselves. But sometimes they classify people according to the values they express. And when they do that, they find a healthy percentage of libertarians, as well as an unfortunate number of big‐​government “populists.”


For more than a dozen years now, the Gallup Poll has been using two questions to categorize respondents by ideology:

Combining the responses to those two questions, Gallup found the ideological breakdown of the public shown below. With these two broad questions, Gallup consistently finds about 20 percent of respondents to be libertarian. 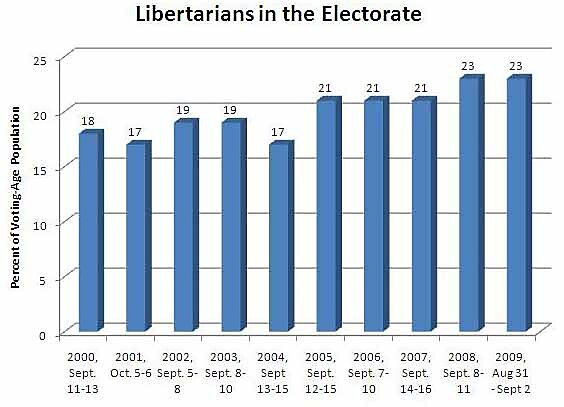 The word “libertarian” isn’t well known, so pollsters don’t find many people claiming to be libertarian. And usually they don’t ask. But a large portion of Americans hold generally libertarian views — views that might be described as fiscally conservative and socially liberal, or as Gov. William Weld told the 1992 Republican National Convention, “I want the government out of your pocketbook and out of your bedroom.” They don’t fit the red‐​blue paradigm, and they have their doubts about both conservative Republicans and liberal Democrats. They’re potentially a swing vote in elections. Background on the libertarian vote here.


And note here: If you tell people that “libertarian” means “fiscally conservative and socially liberal,” 44 percent will accept the label.