Freedom of the Press and Venezuela

There’s a general relationship between freedom of the press and economic freedom. My research assistant prepared the graph below showing that correlation. Countries that are more economically free tend to have a freer press. 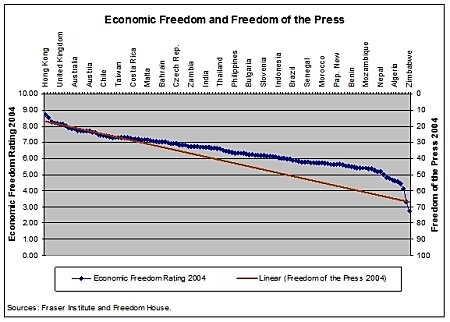 Venezuelans have been finding that out in recent years as their level of economic freedom, which has been in steady decline during the past few decades, has fallen rapidly under the government of Hugo Chávez. Venezuela now ranks 126 out of 130 countries in the Fraser Institute’s economic freedom index (in 1985 it ranked 25th out of 111 countries). When you concentrate economic power in political hands, the institutions of civil society lose their independence.

The latest casualty in Chávez’s campaign to control the media is Radio Caracas Television (RCTV), whose license the government recently announced will not be renewed. RCTV, founded in 1930, was one of only a few remaining TV stations critical of the government in a country where media outlets are practicing various degrees of self censorship. But, according to the Venezuelan communication minister, RCTV’s “irresponsible attitude hasn’t changed.” Symbolizing the government’s intolerance of dissent is a law passed last year that can land individuals for months or years in jail for expressing disrespectful words about government officials.

The model looks suspiciously similar to that of Vladimir Putin’s Russia, where television stations refrain from criticizing the Kremlin, but a few leading newspapers still do not. In both Venezuela and Russia, relatively few people read newspapers; it is the electronic media that informs the general public.

Journalist and Venezuelan-born Cato adjunct scholar Carlos Ball tells a personal anecdote about the long-term decline of freedom in Venezuela (see his op-ed in Spanish here http://www.elcato.org/node/2143 ). In May 1987, Carlos was the editor of the Diario de Caracas, a leading newspaper. The paper belonged to the business group that owned RCTV. Then-president Jaime Lusinchi conditioned the renewal of RCTV’s license on Carlos Ball’s dismissal. Carlos was fired and the station got a 20-year license. It is that license that is expiring in May. According to Carlos, the road to political and economic centralization was set decades before Chávez declared his so-called socialism of the 21st century. The treatment of RCTV is only the most recent reminder that it is no longer accurate to refer to Venezuela as a democracy.