France at the Brink (Again)? 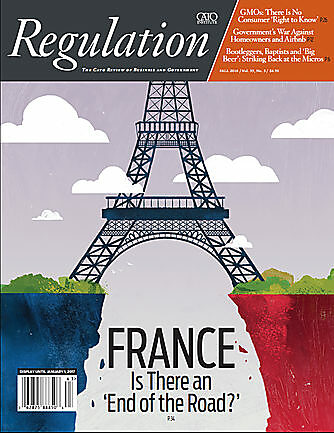 This Sunday, French voters will return to the polls to decide the country’s next president. Last month’s first‐​round vote reduced the field to two unconventional candidates: Emmanuel Macron, formerly a top official of the left‐​wing Parti Socialiste and now leader of the fledgling En Marche! party; and Marine Le Pen, until recently the leader of the nationalist‐​right Front National.


Both candidates are unconventional not just because their parties have never held political power, but because the candidates have fashioned themselves as populist/​outsider champions of downtrodden workers. Granted, sans‐​cullottes appeals are standard fare in French politics, but they have renewed force in this election, following a half‐​decade of French unemployment hovering around 10% and with youth unemployment (under age 25) well above 20%.


French employment and the country’s overall economy have sagged before, of course. U.S. observers often attribute those downturns in part to France’s labor laws, which they say (with irony) protect current workers by discouraging employers from creating new jobs. But French employment and the country’s economy have also surged before; typically France is Europe’s 2nd largest economy, after Germany. The past several decades have heard many predictions that France has reached “the end of the road” (to borrow from Ronald Reagan in 1964) unless it reforms its labor, entitlements, and other domestic policies, but neither economic doom nor dramatic reform has occurred.


Université du Québec en Outaouais economist Pierre Lemieux explored this in last fall’s cover story for Regulation magazine. It’s a great read if you want to learn more about what has led to France’s current conditions and what may lie ahead.