I already explained, immediately following the speech, why his "grand bargain" on corporate taxes was not a good deal because of all the hidden taxes on new investment and international competitiveness.

But I also had a chance to dissect the President's overall track record on the economy for today's Chattanooga Times Free Press.

Here's some of what I wrote.

...he didn’t say anything new or different. His audience was treated to the same tax-spend-and-regulate boilerplate that the President has been dispensing ever since he entered political life. ...with Obamanomics, not only has America failed to enjoy the traditional period of four-to-five percent growth at the start of a recovery, the economy hasn’t even gotten close to the long-run average of 3 percent. That’s a damning indictment. But it gets worse. The data on employment is downright depressing. A look at the numbers reveals that the nation is suffering from the worst period of job creation since the Great Depression. Most startling, we still haven’t recovered the jobs we lost during the recession.

That's some strong rhetoric, but there are plenty of numbers to back up my assertions.

Let's take a look at the interactive website maintained by the Minneapolis Federal Reserve Bank. This site allows users to compare all business cycles since World War II.

Let's start by comparing the current business cycle to what happened under Reaganomics.

As you can see, we've had a very sluggish recovery compared to the boom we enjoyed in the 1980s.

Not all of this is Obama's fault, by the way. Here's some more of what I wrote for the Chattanooga Times Free Press.

...all of these problems started before President Obama ever got to the White House. President Bush also was guilty of too much spending and excessive regulation, and his policies helped push the economy into a ditch. Unfortunately, even though he promised “change,” President Obama has been adding to Bush’s mistakes — and also raising taxes.

Some people may be wondering whether it's fair to compare Reaganomics to Obamanomics. Maybe I'm cherry-picking data to make Obama (and Bush) look bad.

Since I've already admitted that it's good to be suspicious of all people who work in Washington, I don't begrudge folks who are skeptical of what I write.

So let's now look at the Minneapolis Fed's data for every business cycle since the end of World War II. As you can see, the red line (representing where we are today) stands out in the wrong way. 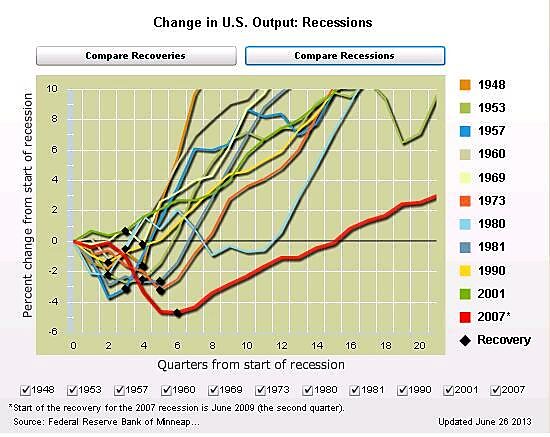 The employment data is even worse than the GDP data.

The comparison of Reaganomics with BushObamanomics is startling. There was a jobs boom in the 1980s, while today we haven't even recovered all the jobs lost during the downturn. 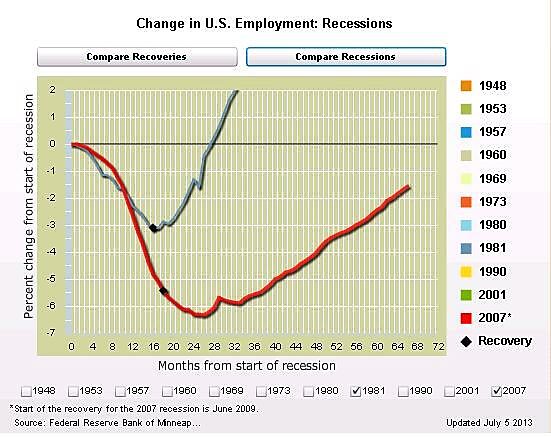 And if we look at what we're experiencing now compared to all other business cycles, it becomes even more apparent that big government is generating very bad results for the American people. 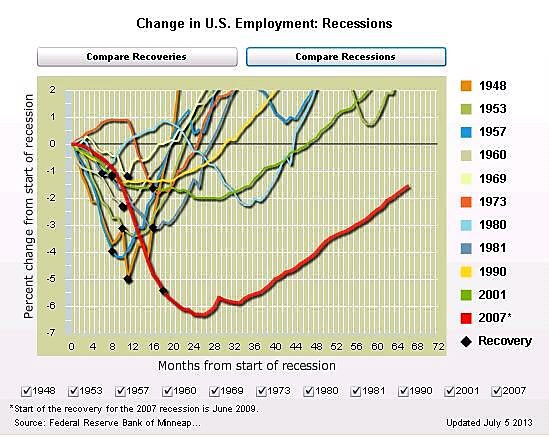 Here's how I conclude my column.

...what’s the bottom line? The world is a laboratory, and the lessons are very clear. Jurisdictions with small government and free markets, such as Hong Kong and Singapore, grow rapidly. Nations with bloated welfare states, such as France, Italy and Greece, suffer from stagnation and decline. The United States historically has been somewhere between these two camps, which is why we had average growth of about 3 percent. We’ve become a lot more like Europe during the Bush-Obama years. That helps to explain why our growth numbers and jobs data are now so disappointing. Unfortunately, the President’s speech shows that he wants to step on the gas rather than turn the car in the right direction.

In other words, if we want more prosperity, we need to follow the recipe of free markets and small government.