Republicans are jumping on the news that participation in the food stamps program hit a new record of 46.7 million individuals in June (about one in seven Americans). In a sluggish economy, an increase in food stamps participation is to be expected. Thus, it’s fair to hold up the increase in food stamps usage as being emblematic of the Obama administration’s failed economic policies. In addition, the president’s 2009 “stimulus” bill increased benefits and eligibility.


What Republicans don’t want to acknowledge is the role they played in expanding the food stamps program before President Obama ever took office. The 2002 farm bill—passed by a Republican‐​controlled House and signed by Republican President George W. Bush—expanded the food stamps program. As the Wall Street Journal’s editorial page correctly noted yesterday, “The food‐​stamp boom began with the George W. Bush Republicans, who expanded benefits in the appalling 2002 farm bill.”


The 2008 farm bill further expanded the program. However, on this the Journal lets the GOP off the hook when it says “But the supercharger was a 2008 bill out of the Pelosi Congress that goosed eligibility and rebranded the program as the Supplemental Nutrition Assistance Program, to reduce the stigma of being on the dole.” Although Bush vetoed that farm bill (he didn’t cite the increase for food stamps in his veto message), congressional Republicans were instrumental in enabling the “Pelosi Congress” to override it. In the House, 99 (out of 195) Republicans joined most Democrats in voting to override the veto. In the Senate, only 12 Republicans voted to sustain Bush’s veto.


One of those Republicans who voted to override Bush’s veto—and who also voted for the 2002 farm bill—is Sen. Jeff Sessions of Alabama. Sessions, who is the ranking member of the Senate Budget Committee, has been a chief critic of the growth in food stamps under President Obama. Sessions has been particularly critical of the administration’s efforts to “recruit” new food stamps recipients. For example, a “Community Outreach Partner Toolkit” produced by the USDA in 2011 that suggests throwing a “great party”:

Host social events where people mix and mingle. Make it fun by having activities, games, food, and entertainment, and provide information about SNAP. Putting SNAP information in a game format like BINGO, crossword puzzles, or even a “true/​false” quiz is fun and helps get your message across in a memorable way.

It’s probable, however, that the food stamps outreach is being driven by the bureaucrats at the USDA. To Sessions’s credit, he acknowledges as much in a press release on the USDA’s recent cessation of radio ads designed to attract Spanish‐​speaking individuals to the program. It’s important to note that these “radio novellas” were produced during the Bush administration. Similarly, a partnership with the Mexican government to make Mexican nationals more aware of U.S. welfare programs—including food stamps—was signed by Bush’s agriculture secretary Ann Veneman in 2004.


The Obama administration certainly deserves to be heavily criticized for the growth in government dependency. But attacks from Republicans (e.g., Newt Gingrich calling President Obama the “food stamps president”) have been too disingenuous. Yes, Republicans are now calling for the food stamps program to be cut, but given their culpability in its growth—and the fact that it’s an election year—it’s hard to view their sudden discovery of religion as anything more than standard politics. 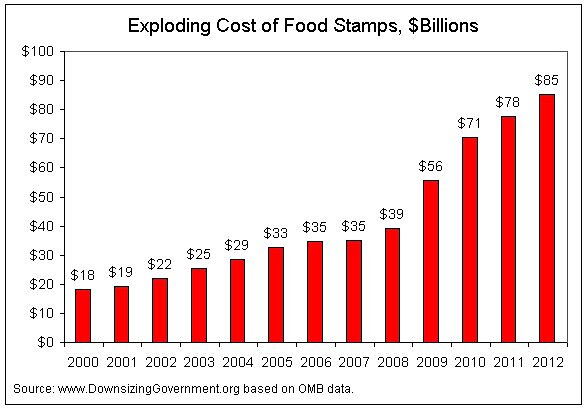