Prior to last week’s passage of another $26 billion in bailout money for state and local governments, I noted that the legislation wasn’t really offset:

Congressional Democrats say the measure is paid for with a combination of spending cuts elsewhere and tax increases. However, the new spending is front loaded and much of the spending cuts wouldn’t be realized until after 2013. For example, the Congressional Budget Office’s score of the legislation shows savings from the food stamps program of $12 billion from 2014-2018. Congress can come back any time before that and rescind the cuts.

It’s typical Beltway budgetary sleight-of-hand: increase spending up front and “cut” spending on the back-end to get a more deficit-friendly score from the CBO. Democrats don’t really intend to see these cuts actualized, and have indicated as much. That hasn’t stopped media outlets from across the ideological spectrum from running sensationalist headlines.

Adding to the heat is legislation moving through Congress that would “cut” future food stamps spending to help pay for increased child nutrition programs. But as was the case with the bailout legislation, the only change that’s being proposed is to move forward the expiration date for the temporary food stamp expansion contained in the 2009 stimulus bill.

In addition to unnecessary hand-wringing over the future, the near past is all but being ignored. As the following chart shows, the cost of the food stamps programs has exploded over the decade thanks to the recession and benefit increases under presidents Bush and Obama: 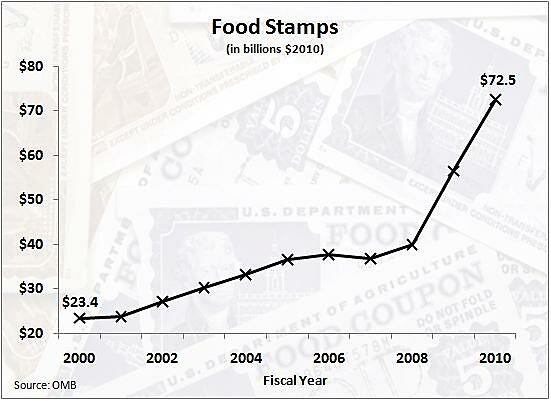 The food stamps program needs to be cut. In fact, the entire federal welfare system needs to be devolved to the states, or preferably, private charity. That phantom cuts following a massive increase in food stamps spending would cause such angst indicates that those of us who believe the needy aren’t best served by Uncle Sam have our work cut out.