“Landlords cannot be allowed to raise rents to whatever they want, whenever they want,” Senator Bernie Sanders boomed on Twitter in November. “We need…a national rent control standard.” Now, his presidential campaign advocates one: under Sanders’ housing proposals, all landlords nationwide would only be able to increase rents annually by one and a half times the rate of inflation or 3 percent, whichever is higher. Assuming the current CPI for Urban Consumers is the inflation measure used, that would mean a rent increase cap today of just 3.4 percent.

Given the likely unconstitutionality of a truly national rent control law, one suspects Sanders should be taken seriously but not literally. What he is really doing here is endorsing a spate of new rent control laws across states, encouraging left‐​wing activists to push for more stringent restrictions elsewhere. California has already instituted a 5 percent plus inflation cap for older buildings. Oregon has passed a rent increase cap of seven percent per year above CPI. New York just expanded protections for existing rent stabilized tenants and is expected to follow the others with a proposal for a general rent cap.

But that Sanders’ national proposal probably won’t or can’t be implemented doesn’t mean his reasoning won’t damage housing policy across the country. His claim that landlords can charge “whatever they want” entrenches the idea that rents are set through greed or market power, not supply and demand. And if crude, low level rent increase caps are implemented even in individual cities, it could have disastrous consequences in “hot” markets – particularly given proposals like his are shorn of the exemptions one usually sees for small‐​time landlords, new properties or vacant units, that can provide a safety valve for the rental market.

To see the folly of a national rent policy, consider the differential state of major U.S. housing markets. According to a Demographia report last week, Rochester, New York has a median house price just two‐​and‐​a‐​half times the median income for the city. Similarly affordable housing can be found in Cleveland, Ohio and Oklahoma City (both 2.7 median multiples). On the other end of the spectrum, major Californian housing markets such as Los Angeles, San Jose, and San Francisco all have mean multiples above 8, while Seattle (5.5), Miami (5.4), and New York (5.4) are still deemed “severely unaffordable.”

Given housing affordability varies so much, we shouldn’t be surprised that rents similarly differ by locality. And if we accept that rents differ across the country for similar housing because of different household sizes, incomes, land use and zoning laws, and more, it stands to reason that average rents will change at different rates year‐​to‐​year as these supply and demand factors vary.

Looking across the last 20 years shows this clearly (see Table 1). In the broad housing markets around San Francisco, Seattle, Miami and Denver, average rent increases have exceeded what Bernie Sanders’ proposal would allow in over one of every two years. In contrast, cities such as Milwaukee, Cleveland, and St Louis have rarely seen rent increases exceed Sanders’ arbitrary cap. Within cities, we’d expect differences by neighborhood too (though perhaps with lower variance). 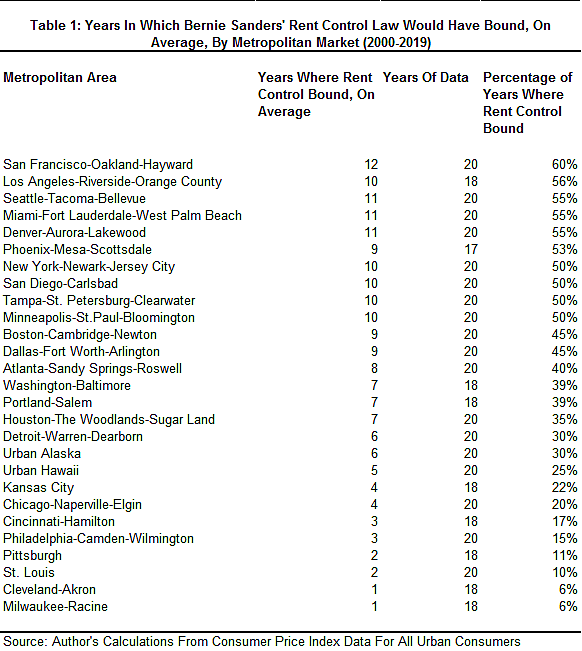 Is there any reason to suspect that landlords have been greedier in Miami than Milwaukee, or Seattle than St Louis? Or is it more likely that supply and demand trends have been different across cities over that 20 years? This evidence, plus the fact that rents within individual cities’ neighborhoods tend to quickly converge for certain property types and size, suggests that landlords cannot raise rents to “whatever they, whenever they want.” In reality, they are constrained both by tenants’ ability to pay and the availability of substitute properties. Or, to put it another way, by supply and demand.

Once one accepts that rental prices are overwhelmingly the product of market forces, not landlord greed, you see why rent control, especially as Sanders’ envisages, is such a misguided idea. It effectively seeks to drown out the message that rising rents is submitting – of an increased relative scarcity of rentable accommodation that has led rents to rise to clear the market. Instead, capping rents forces on the market the comforting lie that property is abundant. That produces a whole range of well‐​documented consequences.

Consider neighborhoods where market rents are expected to rise in the coming year beyond Sanders’ current 3.4 percent cap. The rent control will therefore bind, and if market rents continue increasing rapidly (perhaps because of an unresponsive supply of new housing to demand) then rents paid will become lower and lower relative to the underlying market rent. For hot rental markets:

In short, a Sanders national rent control proposal would bring a lot of economic damage. But even if implemented more locally, such a crude rent cap would bring significant downsides to local housing markets, and the economy more broadly. And all based on the misguided idea that landlords have vast market power to set rents.