Democrats think preexisting conditions will once again carry them to electoral victory. Despite their own liabilities and callousness on the issue, they’re probably right.

In 2018, Democrats accused Republicans of wanting to deny health care to the sick. Exhibit A, they said, was the GOP’s attempt to repeal ObamaCare’s popular preexisting-conditions provisions. The accusation worked. Democrats flipped a net 41 House seats to take control of the chamber. Conventional wisdom considers the outcome to be proof that ObamaCare is (finally) popular with voters.

In 2020, Democrats are deploying the same strategy. A meritless yet somewhat successful Republican-led legal challenge to ObamaCare now sits before the Supreme Court. Oral arguments will occur mere days after the election and mere days after the GOP replaces the late Justice Ruth Bader Ginsburg with a jurist who is unlikely to approach ObamaCare with the same reverence Ginsburg did: 7th Circuit Court of Appeals Judge Amy Coney Barrett. This confluence of events again enables Democrats to accuse Republicans of wanting to deny care to the sick by eliminating ObamaCare’s popular preexisting-conditions provisions.

There are several problems with this line of attack, however.

I wish they had. But even the Congressional Budget Office acknowledged the “repeal” bill House Republicans introduced in 2017 would not have repealed those provisions:

Insurers would still be required to provide coverage to any applicant, would not be able to vary premiums to reflect enrollees’ health status or to limit coverage of preexisting medical conditions, and would be limited in how premiums could vary by age.

In fairness, the GOP-led lawsuit now before the Supreme Court does try to eliminate those provisions. Yet while their strategy is accurate this time around, Democrats never seem to mention…

ObamaCare’s architects know what most ObamaCare supporters don’t: the preexisting-conditions provisions create incentives for insurers to deny care to the sick.

We know the architects knew this knew because they included other provisions in the law—most notably, the risk-adjustment program—that exist solely to counteract the perverse incentives that the preexisting-conditions provisions create.

Anecdotal evidence and empirical studies show those other provisions are not working. ObamaCare’s preexisting-conditions provisions are making coverage worse for patients with multiple sclerosis and other expensive conditions. They are denying care, for example, to seven-year-old leukemia patient Colette Briggs. (Watch this Cato Institute forum on Colette’s case.) A coalition of 150 patient groups complains this dynamic “completely undermines the goal of the ACA.”

Well, at least ObamaCare doesn’t deny coverage to the sick, right? Except…

Something else ObamaCare’s architects know but that most ObamaCare supporters don’t: the law’s preexisting-conditions provisions deny coverage to patients with preexisting conditions—like Jeanne Balvin—by prohibiting them from purchasing coverage for 10 months out of the year.

ObamaCare generally prohibits purchasing coverage outside a brief “open” enrollment window at the end of each year. That prohibition exists specifically to deny coverage to people with preexisting conditions.

Well, those provisions may have drawbacks. But voters like them, right? About that…

Nor have they ever been. Those provisions are popular only in a fantasy world where they have no costs.

When voters learn that ObamaCare’s preexisting-conditions provisions are reducing the quality of coverage available for the sick, they oppose those provisions 51 percent to 44 percent. Among Democrats, support drops by 30 percent. 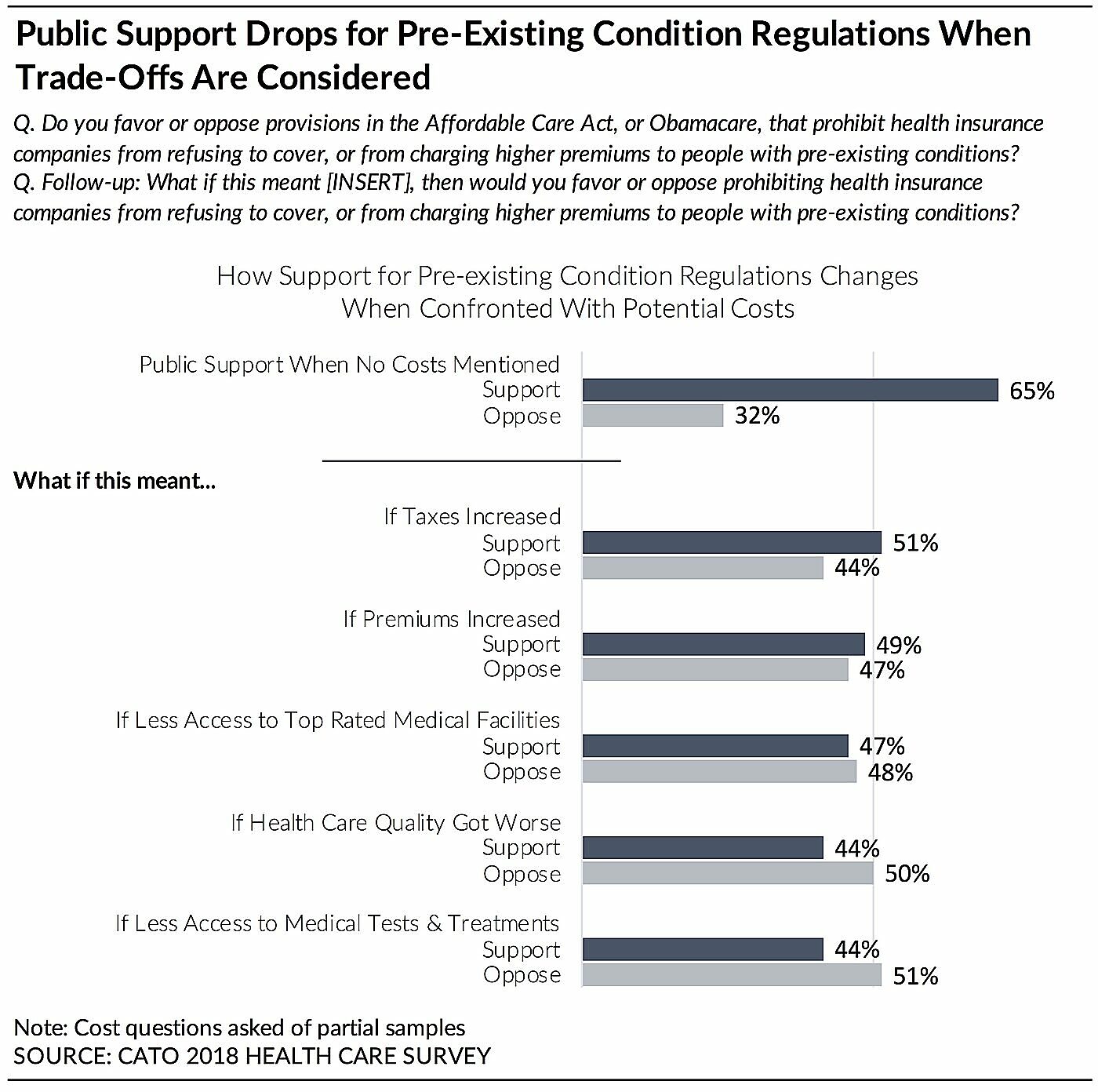 There’s also evidence that ObamaCare’s general prohibition on purchasing and switching health plans throughout the year is unpopular. The Foundation for Government Accountability found 83 percent of Exchange enrollees—including 78 percent of Democrats—want to restore that freedom.

“Yes, but,” Democrats might say, “We are trying to preserve the coverage people have. Republicans are trying to take coverage away from the sick!” Maybe. But they’re not the only ones…

Democrats (and their allies in the insurance industry) are so obsessed with blocking consumers from accessing the protections available through “short-term” health insurance that they are literally stripping coverage from patients after they get sick and leaving them with no coverage for up to 12 months.

Congress exempts short-term plans from ObamaCare’s regulations, which enables them to offer broader networks and premiums that are often 70 percent less than ObamaCare plans; to cover as much or as little of ObamaCare’s standard benefits package as consumers want; and to protect patients from expensive medical bills during ObamaCare’s closed-enrollment period. Short-term plans also reduce the number of uninsured.

Democrats are so obsessed with denying consumers’ right to choose their health plans that in 2016 the Obama administration arbitrarily limited short-term plans to just three months in duration. State insurance regulators had warned the move would strip sick patients of their coverage and leave them with zero protection. They were right: the Obama rule stripped 61-year-old Arizona resident Jeanne Balvin of her health insurance after she developed diverticulitis, leaving her with no insurance and $97,000 in unpaid medical charges.

The Trump administration rescinded the Obama rule. It decreed that short-term plans may last up to 36 months and that insurers can offer renewal guarantees that provide even greater protection. After hearing Democrats’ best criticisms, voters still support this approach 59 percent to 35 percent. 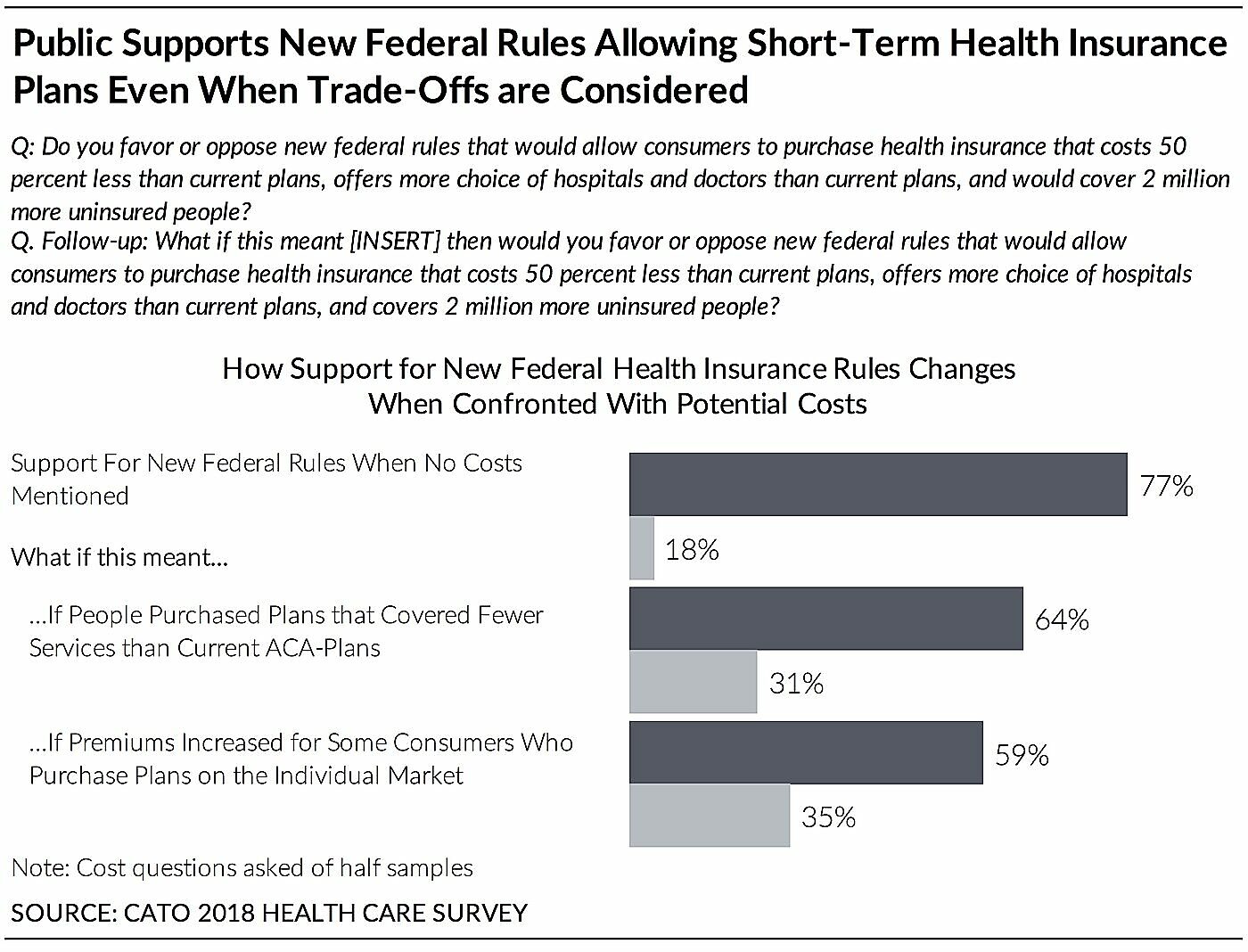 Yet Democrats (and their allies in the insurance industry) are continuing their campaign to throw sick patients out of their health insurance.

The moral of the story is: neither party is worth emulating here.

On preexisting conditions, President Trump has hardly been a paragon of honesty. Or consistency. Or clarity. Or empathy. But we can say two things in Republicans’ favor. First, the Trump administration has helped to reduce the problem of preexisting conditions by allowing short-term plans to provide affordable, secure, renewable term health insurance. Second, getting rid of ObamaCare would not throw a single person out of their health coverage because if someone’s coverage depends on a government regulation or subsidy, then it isn’t really theirs in the first place.

So far as I can tell, Democrats are the only ones throwing people out of health insurance that the consumer chose and purchased and likes. Democrats enjoy cancelling other people’s health insurance coverage so much, it’s creepy. They did it when they passed ObamaCare. They’re doing it again now with short-term plans. They’re really quite callous and cavalier about it. Sanctimonious, even.

And yet, even though all available polling shows Republicans have a more powerful counterattack, the Democrats’ strategy of attacking Republicans on preexisting conditions is likely to work in 2020 just as it did in 2018. In all likelihood, Democrats will convince voters to punish Republicans for fantasizing about doing what Democrats actually do. It will work because Republicans have their own brand of callousness: they just can’t bring themselves to care about health care.