The news is going from bad to worse for Ireland. The Irish Independent is reporting that the Swiss Central Bank no longer will accept Irish government bonds as collateral. The story also notes that one of the world's largest bond firms, PIMCO, is no longer purchasing debt issued by the Irish government.

And this is happening even though (or perhaps because?) Ireland received a big bailout from the European Union and the International Monetary Fund (and the IMF's involvement means American taxpayers are picking up part of the tab).

I've already commented on Ireland's woes, and opined about similar problems afflicting the rest of Europe, but the continuing deterioration of the Emerald Isle deserves further analysis so that American policy makers hopefully grasp the right lessons. Here are five things we should learn from the mess in Ireland.

1. Bailouts Don't Work -- When Ireland's government rescued depositors by bailing out the nation's three big banks, they made a big mistake by also bailing out creditors such as bondholders. This dramatically increased the cost of the bank bailout and exacerbated moral hazard since investors are more willing to make inefficient and risky choices if they think governments will cover their losses. And because it required the government to incur a lot of additional debt, it also had the effect of destabilizing the nation's finances, which then resulted in a second mistake -- the bailout of Ireland by the European Union and IMF (a classic case of Mitchell's Law, which occurs when one bad government policy leads to another bad government policy).

American policy makers already have implemented one of the two mistakes mentioned above. The TARP bailout went way beyond protecting depositors and instead gave unnecessary handouts to wealthy and sophisticated companies, executives, and investors. But something good may happen if we learn from the second mistake. Greedy politicians from states such as California and Illinois would welcome a bailout from Uncle Sam, but this would be just as misguided as the EU/IMF bailout of Ireland. The Obama Administration already provided an indirect short-run bailout as part of the so-called stimulus legislation, and this encouraged states to dig themselves deeper in a fiscal hole. Uncle Sam shouldn't be subsidizing bad policy at the state level, and the mess in Europe is a powerful argument that this counter-productive approach should be stopped as soon as possible.

By the way, it's worth noting that politicians and international bureaucracies behave as if government defaults would have catastrophic consequences, but Kevin Hassett of the American Enterprise Institute explains that there have been more than 200 sovereign defaults in the past 200 years and we somehow avoided Armageddon.

2. Excessive Government Spending Is a Path to Fiscal Ruin -- The bailout of the banks obviously played a big role in causing Ireland's fiscal collapse, but the government probably could have weathered that storm if politicians in Dublin hadn't engaged in a 20-year spending spree.

The red line in the chart shows the explosive growth of government spending. Irish politicians got away with this behavior for a long time. Indeed, government spending as a share of GDP (the blue line) actually fell during the 1990s because the private sector was growing even faster than the public sector. This bit of good news (at least relatively speaking) stopped about 10 years ago. Politicians began to increase government spending at roughly the same rate as the private sector was expanding. While this was misguided, tax revenues were booming (in part because of genuine growth and in part because of the bubble) and it seemed like bigger government was a free lunch. 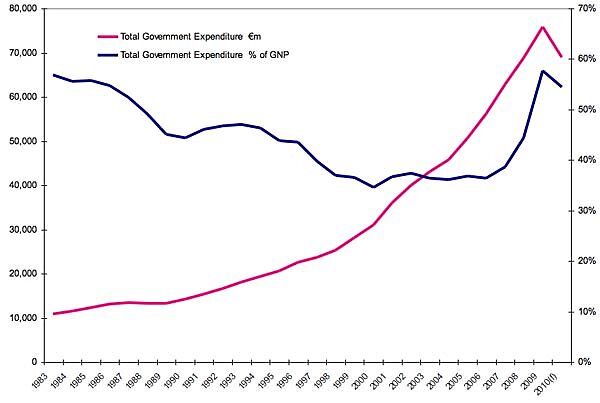 Eventually, however, the house of cards collapsed. Revenues dried up and the banks failed, but because the politicians had spent so much during the good times, there was no reserve during the bad times.

American politicians are repeating these mistakes. Spending has skyrocketed during the Bush-Obama year. We also had our version of a financial system bailout, though fortunately not as large as Ireland's when measured as a share of economic output, so our crisis is likely to occur when the baby boom generation has retired and the time comes to make good on the empty promises to fund Social Security, Medicare, and Medicaid.

3. Low Corporate Tax Rates Are Good, but They Don't Guarantee Economic Success if other Policies Are Bad -- Ireland used to be a success story. They went from being the "Sick Man of Europe" in the early 1980s to being the "Celtic Tiger" earlier this century in large part because policy makers dramatically reformed fiscal policy. Government spending was capped in the late 1980 and tax rates were reduced during the 1990s. The reform of the corporate income tax was especially dramatic. Irish lawmakers reduced the tax rate from 50 percent all the way down to 12.5 percent.

This policy was enormously successful in attracting new investment, and Ireland's government actually wound up collecting more corporate tax revenue at the lower rate. This was remarkable since it is only in very rare cases that the Laffer Curve means a tax cut generates more revenue for government (in the vast majority of cases, the Laffer Curve simply means that changes in taxable income will have revenue effects that offset only a portion of the revenue effects caused by the change in tax rates).

Unfortunately, good corporate tax policy does not guarantee good economic performance if the government is making a lot of mistakes in other areas. This is an apt description of what happened to Ireland. The silver lining to this sad story is that Irish politicians have resisted pressure from France and Germany and are keeping the corporate tax rate at 12.5 percent. The lesson for American policy makers, of course, is that low corporate tax rates are a very good idea, but don't assume they protect the economy from other policy mistakes.

4. Artificially Low Interest Rates Encourage Bubbles -- No discussion of Ireland's economic problems would be complete without looking at the decision to join the common European currency. Adopting the euro had some advantages, such as not having to worry about changing money when traveling to many other European nations. But being part of Europe's monetary union also meant that Ireland did not have flexible interest rates.

But if America already had a bubble, what lesson can we learn from Ireland? The simple answer is that we should learn to avoid making the same mistake over and over again. Easy money is a recipe for inflation and/or bubbles. Simply stated, excess money has to go someplace and the long-run results are never pleasant. Yet Ben Bernanke and the Federal Reserve have launched QE2, a policy explicitly designed to lower interest rates in hopes of artificially juicing the economy.

5. Housing Subsidies Reduce Prosperity -- Last but not least, Ireland's bubble was worsened in part because politicians created an extensive system of preferences that tilted the playing field in the direction of real estate. The combination of these subsidies and the artificially low interest rates caused widespread malinvestment and Ireland is paying the price today.

Since we just endured a financial crisis caused in large part by a corrupt system of housing subsidies for Fannie Mae and Freddie Mac, American policy makers should have learned this lesson already. But as Thomas Sowell sagely observes, politicians are still fixated on somehow re-inflating the housing bubble. The lesson they should have learned is that markets should determine value, not politics.