The Washington Post just did a major poll of Virginians and tantalizingly included this note in writing up the results:

In contrast to four years ago, about as many Virginians consider themselves to be liberal on social matters as call themselves conservative. Fiscal conservatism is on the rise, but on these social issues, it’s liberalism that’s ticked higher.

But those questions were not included in the published data. Thanks to the generosity of Post polling director Jon Cohen, I can report that the percentage of Virginians who said they were socially liberal or moderate and fiscally conservative went from 16 in 2007 to 23 in the latest poll. This reflects a small increase in the number of social liberals and a larger increase in the number of fiscal conservatives. And here are the tables on those questions: 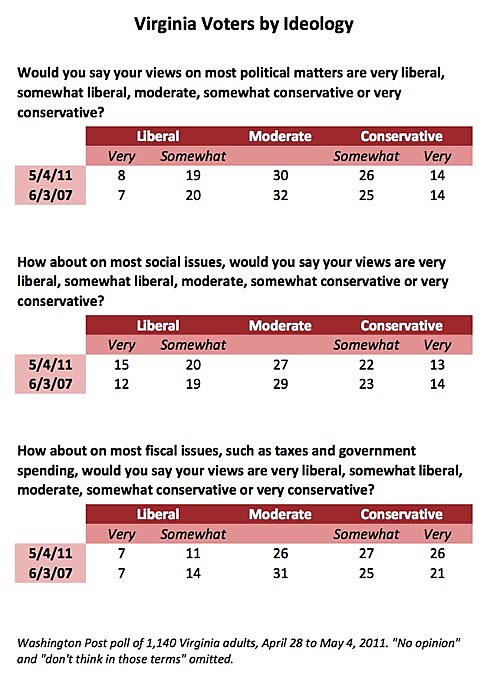 We’ve written about fiscally conservative, socially liberal voters before, notably here and here, and in relation to Virginia and in the Republican party. Apparently when you ask people, “Would you describe yourself as fiscally conservative and socially liberal?”, you get a higher percentage than when you ask the questions separately, as the Post did. When the Zogby Poll asked that question to actual voters in 2006, fully 59 percent said yes. Broader background on the “libertarian vote” here.