Fiscal Fights with Friends, Part I: Responding to Reihan Salam’s Argument against the Flat Tax

In my ultimate fantasy world, Washington wouldn't need any sort of broad-based tax because we succeeded in shrinking the federal government back to the very limited size and scope envisioned by our Founding Fathers.

In my more realistic fantasy world, we might not be able to restore constitutional limits on Washington, but at least we could reform the tax code so that revenues were generated in a less destructive fashion.

That's why I'm a big advocate of a simple and fair flat tax, which has several desirable features.

But not everyone is on board, The class-warfare crowd will never like a flat tax. And Washington insiders hate tax reform because it undermines their power.

But there are also sensible people who are hesitant to back fundamental reform.

Consider what Reihan Salam just wrote for National Review. He starts with a reasonably fair description of the proposal.

The original flat tax, championed by the economists Robert Hall and Alvin Rabushka, which formed the basis of Steve Forbes’s flat-tax proposal in 1996, is a single-rate tax on consumption, with a substantial exemption to make the tax progressive at the low end of the household-income distribution.

Though if I want to nit-pick, I could point out that the flat tax has effective progressivity across all incomes because the family-based exemption is available to everyone. As such, a poor household pays nothing. A middle-income household might have an effective tax rate of 12 percent. And the tax rate for Bill Gates would be asymptotically approaching 17 percent (or whatever the statutory rate is).

...the Hall-Rabushka tax would be highly regressive, in part because high-income households tend to consume less of their income than lower-income households and because investment income would not be taxed (or rather double-taxed).

This is a very schizophrenic passage since he makes a claim of regressivity even though he acknowledged that the flat tax has effective progressivity just a few sentences earlier. 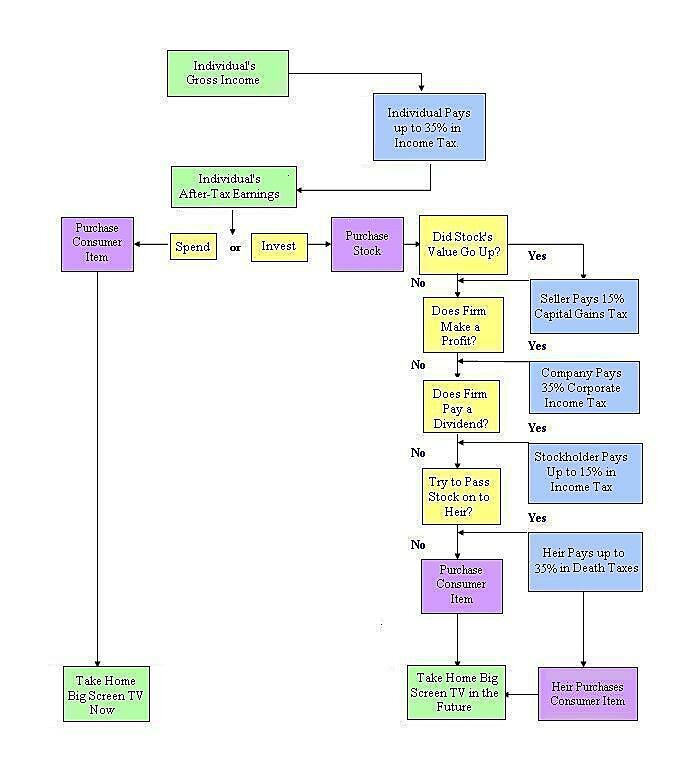 And since he admits that the flat tax actually does tax income that is saved and invested (but only one time rather than over and over again, as can happen in the current system), it's puzzling why he says the system is "highly regressive."

If he simply said the flat tax was far less progressive (i.e., less discriminatory) than the current system, that would have been fine.

Here's the next passage that rubbed me the wrong way.

...there is some dispute over whether ending the double taxation of savings would yield significant growth dividends. Chris William Sanchirico of Penn Law School takes a skeptical view in a review of the academic research on the subject, in part because cutting capital-income taxation as part of a revenue-neutral reform would require offsetting increases in labor-income taxation, which would dampen long-term economic growth in their own right.

I'm not even sure where to start. First, Reihan seems to dismiss the role of dynamic scoring in enabling low tax rates on labor. Second, he cites just one professor about growth effects and overlooks the overwhelming evidence from other perspectives. And third, he says the flat tax would be revenue neutral, when virtually every plan that's been proposed combines tax reform with a tax cut.

On a somewhat more positive note, Reihan then suggests that lawmakers instead embrace "universal savings accounts" as an alternative to sweeping tax reform.

Instead of campaigning for a flat tax, GOP candidates ought to consider backing Universal Savings Accounts (USAs)... The main difference between USAs and Roth IRAs is that “withdrawals could be made at any time for any reason,” a change that would make the accounts far more attractive to far more people. ...Unlike a wholesale shift to consumption taxation, USAs with a contribution limit are a modest step in the same general direction, which future reformers can build on.

I have no objection to incremental reform to reduce double taxation, and I've previously written about the attractiveness of USAs, so it sounds like we're on the same page. And if you get rid of all double taxation and keep rates about where they are now, you get the Rubio-Lee tax plan, which I've also argued is a positive reform.

But then he closes with an endorsement of more redistribution through the tax code.

Republicans should put Earned Income Tax Credit expansion and other measures to improve work incentives for low-income households at the heart of their tax-reform agenda.

I want to improve work incentives, but it's important to realize that the EIC is "refundable," which is simply an inside-the-beltway term for spending that is laundered through the tax code. In other words, the government isn't refunding taxes to people. It's giving money to people who don't owe taxes.

As an economist, I definitely think it's better to pay people to work instead of subsidizing them for not working. But we also need to understand that this additional spending has two negative tax implications.

In any event, I don't want the federal government in the business of redistributing income. We'll get much better results, both for poor people and taxpayers, if state and local government compete and innovate to figure out the best ways of ending dependency.

The rest of Reihan's column is more focused on political obstacles to the flat tax. Since I've expressed pessimism on getting a flat tax in my lifetime, I can't really argue too strenuously with those points.

In closing, I used "friendly fight" in the title of this post for a reason. I don't get the sense that Mr. Salam is opposed to good policy. Indeed, I would be very surprised if he preferred the current convoluted system over the flat tax.

But if there was a spectrum with "prudence" and "caution" on one side and "bold" and "aggressive" on the other side, I suspect we wouldn't be on the same side. And since it's good for there to be both types of people in any movement, that's a good thing.