By Christopher A. Preble
SHARE
Kusadasi, Turkey, on the Aegean Sea — My impressions from my first 24 hours in Turkey are decidedly personal and narrow–I’m observing Turkish society through a straw. So notwithstanding the images of protest and unrest that are prevalent on Twitter and the international media, the vibe generally is of a confident, vibrant society that is proud of its progress.
I arrived in Istanbul yesterday (Saturday), and we spent most of today in Izmir (the ancient city of Smyrna). Doug Bandow wrote a fine column on the political turmoil–I’m reluctant to call it unrest, which makes it sound more serious than it is. But I have begun to pick up on some of the currents of opinion in this complex country that might help to explain how a minor dispute over some trees in Gezi Park has let loose some long‐​simmering feelings about Recep Tayyip Erdogan and his Justice and Development Party (AKP).
I’ve seen lots of pictures on Twitter that prove the protests are not limited to a few hundred (or thousand) in Taksim Square. From my limited perspective on the first evening, at the Istanbul Gonen Hotel, and this morning at the airport, most Turks appeared to be completely oblivious. A wedding party at the hotel went well into the night (though I was too tired to care).
Istanbul is a massive, sprawling city, of at least 15 million people. There is construction going on everywhere, but also a fair amount left to do. The back streets are pretty much what you’d expect in a city like this (which is to say crowded and chaotic), but the dedicated bus lanes that operate in parallel with the main highway and elsewhere are popular and, I’m told by someone who uses them regularly, extremely convenient. The primary highways flow smoothly, including from and to the airport.
Erdogan, the former mayor of Istanbul, is given credit for initiating a series of public works projects that will ease some of the traffic congestion, and various economic and governance reforms that have helped Turkey to achieve stunning growth over the past decade. Even during the economic doldrums in the United States and Europe, Turkey has done well.
After a short flight this morning from Istanbul to Izmir, we met over lunch with Cevat Durak the mayor of Karsiyaka, one of the municipalities (about 325,000 people) adjacent to Izmir. Izmir, and Karsiyaka especially, is a stronghold of the main opposition party, the Republican People’s Party (CHP). The CHP is proud of Izmir. Proud, for example, of its ability to maintain a hold on municipal politics, despite AKP attempts to thwart them. More generally, Izmir is proud of being different from Istanbul, and the rest of Turkey. Residents who know a bit about the United States liken it to the more laid back west coast. Think of it as the San Diego of Turkey.
Turkish flags, the iconic red with a white crescent and star, are everywhere. In Izmir, however, I saw many flags with Ataturk’s picture superimposed. I had to have one (8 Turkish Lira in the market). I figure this will be a collector’s item when Erdogan bans them.
He couldn’t actually do that, of course. Kemal Ataturk, the founder of modern Turkey, is an icon here. His picture is ubiquitous. In some circles, however, and especially among some in the AKP, to be called a Kemalist would be an insult. Erdogan has risen to prominence by promising to push back on some of the excesses of Kemalism, which some see as being anti‐​religious as opposed to merely secular. Others welcome Erdogan’s assertion of civilian control over the military.
But not everyone is entirely pleased. In the rally held down one of the main streets in Izmir, a little after 6 p.m. local time, there were quite a few Turkish flags with Ataturk. I also saw banners for the leftist parties, the TKP and DSIP. The message on many small banners Boyun Egme, translates roughly to “don’t give up” or “don’t bow down” (to Erdogan and the AKP).
Finally, we arrived here in Kusadasi, a beautiful seaside town popular with European tourists. A medium‐​sized cruise ship was tied up at the pier not far from a Byzantium‐​era castle/​fortress. New and old reside comfortably side by side here in Turkey (except when a new construction project stumbles upon ancient artifacts buried deep below the surface, which apparently happens with some regularity).
As I checked into my hotel, a little after 10 pm, another small rally (several hundred people, I’m guessing) walked just beneath my window. I didn’t see the same left‐​wing party banners as in Izmir, and most of the flags were traditional Turkish (i.e. without Ataturk’s picture). But the words Gezi and Taksim were obvious even to my untrained (i.e. non‐​Turkish speaking) eye. This wasn’t a pro‐​Erdogan rally. 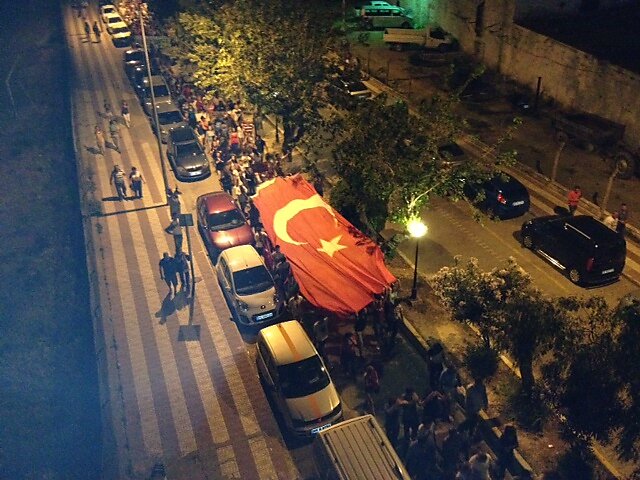 We’ll be seeing more of the coast tomorrow morning by boat, and then off to Ephesus, an ancient town with both religious and cultural significance. I’ll have time to gather my thoughts, and I’ll try to write more about my impressions of the political winds after we arrive in Ankara.