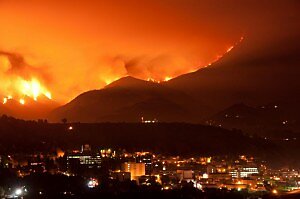 It's summer again, which means it is the time of year for the obligatory photos of wildfires in Southern California. This particular fire, known as the Station Fire, nearly doubled in size in the last 24 hours from 98 to 164 square miles. So far, it has burned at least 18 buildings and cost the lives of at least two firefighters.

The fire began in the Angeles National Forest, and Congress will no doubt respond by giving the Forest Service even more money to suppress such fires in the future. In fact, as I show in my Cato Policy Analysis, The Perfect Firestorm, the Forest Service has, in effect, a blank check to put out fires.

It freely uses that blank check. It has so far spent about $14 million fighting the Station Fire, which supposedly threatens 12,000 homes. But it has also spent $2.5 million on Oregon's Canal Creek Fire, which is less than half a square mile in size and does not threaten any homes or other structures. Better safe than sorry — as long as you have a blank check.

Southern California forests are extremely fire prone — their natural fire regime is to completely burn over every 50 to 100 years. Building homes in such an area might seem foolish, so naturally there have been calls for "fire plain zoning," similar to flood plain zoning, that would restrict such construction. 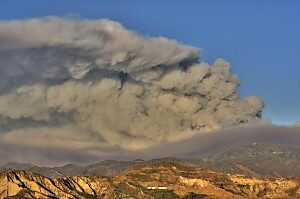 In fact, properly designed homes and landscaping can easily withstand such fires. Most homes destroyed by wildfires are ignited either by burning embers landing on flammable roofs or by the radiant heat from trees or   grasses burning nearby.  Building homes with nonflammable roofs and eves, and landscaping with well-tended lawns and a minimum of flammable trees essentially makes homes fireproof.

Most civilian deaths from wildfire take place during evacuations, not from the fire itself. Homes that are designed to withstand wildfires are known as "shelter-in-place" homes because the residents will be safer in the homes than trying to evacuate.

In 2007, CBS News reported that a fire swept through two San Diego suburbs built to shelter-in-place standards, and "not one home was even touched by flames." Perversely, the reporter concluded that people should not be allowed to build to those standards because it would just encourage them to live in fire-prone areas.

In reality, the lesson is that it would be a lot less expensive to promote shelter-in-place construction standards and retrofitting and then simply let the fires burn at their normal frequencies. The homes would be safe, the forests would be "natural," and fewer firefighters would be at risk.

Why doesn't this happen?

Simple: money. The Forest Service gets a blank check for putting out fires, but almost no money for helping people fireproof their properties. So it continues to spend billions on fire suppression, mainly to protect people's homes, when a lower-cost strategy is readily available.