Despite some of the breathless headlines, Finland is not adopting a national universal basic income. That is, Finland is not scrapping the existing welfare system and distributing the same cash benefit to every adult citizen without additional strings or eligibility criteria. Finland is moving forward with one of the most extensive and rigorous basic income experiments in decades, which could help answer some of the lingering questions surrounding the basic income. The failures of the current system are well documented, but there are concerns about costs and potential work disincentives with a basic income. Finland’s experiment could prove invaluable in trying to find an answer some of these questions, and whether it is possible some kind of basic income or negative income tax would be a preferable alternative to the tangled web of programs in place now.

The Finnish Social Insurance Institution (Kela) will lead a consortium of think tanks, universities, and businesses in surveying the existing literature, analyzing past experiments, and designing different models to test in Finland. They will present an interim report next March, where the government will decide which models to develop further. The consortium will present a final report in November, after which the government will choose which models to actually test. The experiment will begin in 2017 and last for two years, after which the consortium will begin to evaluate the results.

One of the most important issues with any basic income proposal is deciding whether it would replace the current system or be added on to the existing structure. (The latter, of course, does not have much appeal from a limited-government perspective.) The consortium is considering multiple models, as Kela’s presentation shows: 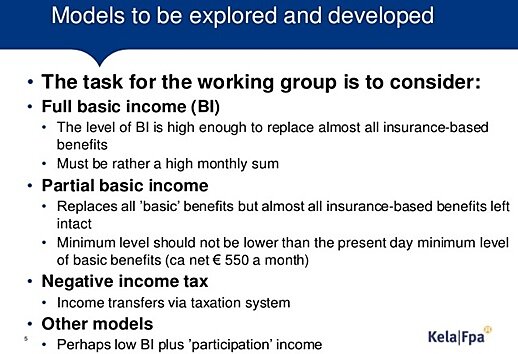 In the full model, most safety net programs would be replaced with a fairly high basic income, while a partial model would purportedly keep some programs, such as housing assistance, intact. The consortium is also exploring a negative income tax, where benefits would be phased-out with earned income. At this early stage, these models are in flux and not fully developed. It’s not yet clear which programs would be replaced in which models or what the benefit level would be. These developments should be closely monitored as the working group solidifies more details.

Finnish politicians may decide to test multiple models, so the experiments could give a better understanding of how the effects of a basic income differ from a negative income tax, for example. Kela has also expressed interest in conducting not only a national experiment, where randomly selected Finns around the country are given the basic income to examine its effects on work effort and well-being, but also county level and local experiments where larger proportions of the target population get the benefit. These local and county experiments would help the researchers analyze the effects of a basic income beyond the individual. At the community level, they may see how businesses, neighborhoods, and other government programs are affected.

Even with these studies, some uncertainty will remain. We won’t know how these results would translate to other countries that have different economies, fiscal situations, and welfare systems. The studies only last two years, so longer-term effects over the course of a person’s life or subsequent generations will not be understood. Even with these limitations, this would be the largest and most comprehensive basic income experiment to date.

Some aspects of a basic income are intriguing. The current system is deeply flawed, so doing away with the dozens of different government programs and bureaucracies has some appeal. But too many questions remain regarding cost and impact on work incentives. My colleague Michael Tanner explored these issues in depth in his paper earlier this year, and an issue of Cato Unbound allowed proponents and skeptics to suss out the topic.  The Finnish experiments, and similar developments in Switzerland and cities like Utrecht, could help answer some of the many questions raised by a basic income proposal. Stay tuned.