The dozens of different programs that form our tangled welfare system often impose high effective marginal tax rates that make it harder for low-income people to transition out of these programs and lift of those programs and into the middle class. As the people in these programs enter the workforce, get a promotion, or work more hours, they can lose a significant portion of those earnings through reduced benefits and increased taxes. A new report from the Congressional Budget Office (CBO) illustrates this predicament: many households hovering around the poverty level face steeper effective marginal tax rates than even the highest earners. These prohibitively high tax rates can discourage work and limit their prospects, ultimately making them less likely to escape poverty.

Marginal Tax Rates at the Median and 90th Percentiles by Earnings Group, 2016 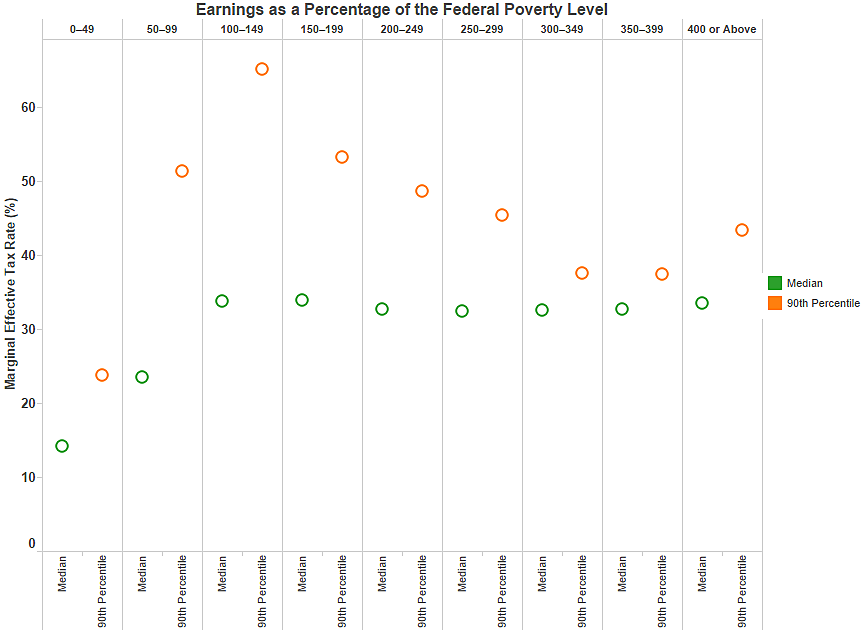 CBO’s analysis looks at the range of effective marginal tax rates households face at different levels of income. The median marginal tax rate for households just above the poverty level is almost 34 percent, the highest for any income level. Some households that receive larger benefits or higher state taxes have even higher effective rates: 10 percent of households just above the poverty line face a marginal rate higher than 65 percent. For each additional dollar earned in this range, these households would lose almost two-thirds to taxes or lost benefits. The comparable rate for the highest earners, households above 400 percent of the poverty level, is only 43.4 percent. If anything this analysis might understate how steep the effective marginal rates are for some households. CBO only considers the combined effect of income taxes, payroll taxes, SNAP and ACA exchange subsidies, so households that participate in other programs like TANF or housing assistance could face even higher rates. These results mirror some of Cato’s past work investigating the issues and trade-offs involved with these welfare programs. 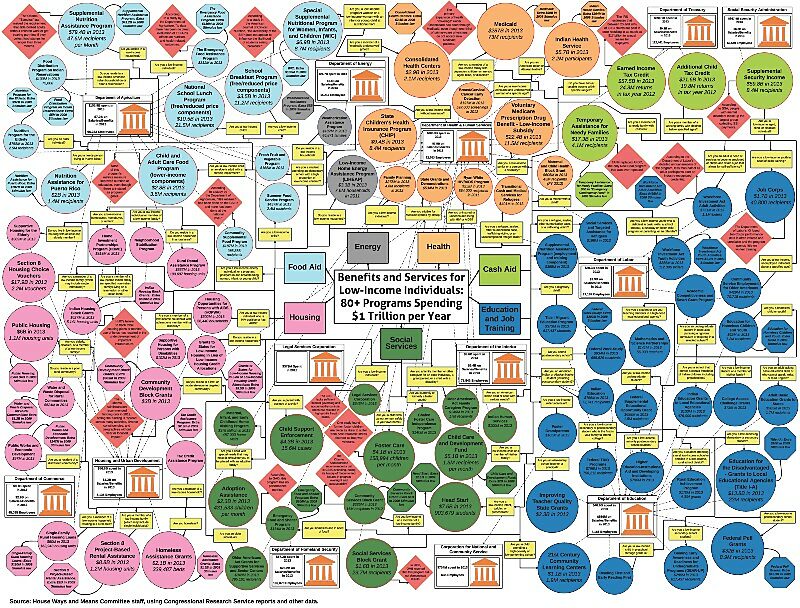 New programs were grafted onto the existing system over time, each intended to address a perceived problem afflicting people in poverty, but they can interact in ways that can deter people from striving to create a better life for their families. That’s part of the reason the status quo system, which the Government Accountability Office estimates spends $742 billion at the federal level each year, has achieved such lackluster results to date.

While these shortcomings would seem to indicate that the welfare system is in need of reform, this tangled web has proved resistant to change. One of the last major reforms happened in 1996, when Temporary Assistance for Needy Families (TANF) replaced Aid to Families with Dependent Children (AFDC). Even that reform only addressed one strand of the dozens that make up our tangled system, so while it might have improved that one aspect the larger flaws with the welfare system as a whole have to some extent continued unabated. Even within this one strand there has been little discussion of reform in the past two decades, TANF hasn’t even been properly reauthorized since the Deficit Reduction Act of 2005, it is usually thrown into short-term continuing resolutions or broader omnibus appropriations acts that do not incorporate any meaningful attempts to address the program’s problems. Absent comprehensive, the flawed current system will continue to fall short even as the government funnels hundreds of billions of dollars into it each year.

If the federal government is going to finance a welfare system, it should foster an environment that encourages work and makes it easier for participants to transition out of these programs as they strive to create a better life. The current system falls far short in that regard and needs comprehensive reforms.