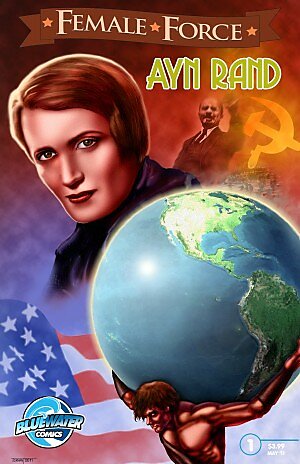 John Blundell, former director of the Institute of Economic Affairs in London, has written a new comic book biography of Ayn Rand. Find it in comic book stores, at Barnes and Noble, or on Amazon. Publisher Bluewater says:

The comic book provides an entertaining yet scholarly look at the author of such seminal works as The Fountainhead and Atlas Shrugged. Even 30 years after her death, her sales of her books continue to sell in the hundreds of thousands each year. Bluewater also worked with the Ayn Rand Institute on the comic book.

"When the American economy went into a nose dive recently what did we all turn to? Did we dig out battered old Econ 101 textbooks? Did we turn to the writings of some aged Ivy League professor? NO! Instead we dusted off or repurchased The Fountainhead and Atlas Shrugged those great classic American novels by Russian immigrant Ayn Rand which deal so brilliantly with the fundamentals of a free and prosperous society of responsible individuals,” said author John Blundell.

Blundell, author of Margaret Thatcher: A Portrait of the Iron Lady as well
as Bluewater's Thatcher bio comic, and formerly the Director General of the
Institute of Economic Affairs in London, emphasizes the relevancy and
potency of Rand's Objectivism ideas in 21st century America.

Blundell also has a book coming in September, Ladies for Liberty: Women Who Made a Difference in American History. That one, I think, will have words but no pictures.