Cato and the Constitutional Accountability Center have filed another amicus brief in a marriage case, this one challenging Louisiana’s restriction of marriage licenses to opposite‐​sex couples and its non‐​recognition of out‐​of‐​state same‐​sex marriages. Filed in the U.S. Court of Appeals for the Fifth Circuit — where last month we filed in a case out of Texas—this is an appeal from the only ruling to uphold a state marriage law since the Supreme Court’s decision in United States v. Windsor struck down part of the Defense of Marriage Act. (A federal judge in Puerto Rico also recently upheld that commonwealth’s law.)


Our previous briefs, including in that Texas case and also regarding the marriage laws of Oklahoma, Utah, Virginia, Michigan, Tennessee, Kentucky, Indiana, and Wisconsin in the Tenth, Fourth, Sixth, and Seventh Circuits, respectively, focused on the original public meaning of the Fourteenth Amendment’s Equal Protection Clause and its guarantee of “equality under law” for all. Here, however, we focus on federalism, democracy, and why states shouldn’t automatically get judicial deference when they pass legislation. 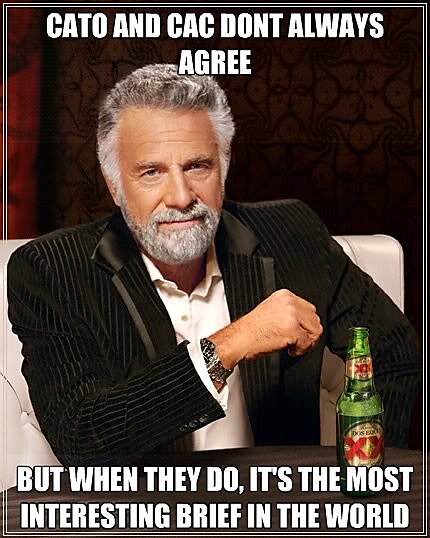 That is, the Fourteenth Amendment significantly reworked the constitutional order such that the U.S. Constitution now protects individual liberty against state infringement (which wasn’t the case before the Civil War). When the district court held that Louisiana was free to deny loving, committed same‐​sex couples the freedom to marry because the state “has a legitimate interest … for addressing the meaning of marriage through the democratic process,” it empowered the people of the states to use the democratic process to oppress disfavored minorities and thus overturned the constitutional order we’ve had since 1868.

Since the ratification of the Reconstruction‐​Era amendments, the Constitution has required states to respect fundamental constitutional principles, curtailing the power of majorities to violate individual rights. Consistent with these first principles, the Supreme Court has repeatedly recognized that constitutional guarantees that protect the individual from abuse by the government cannot be left to the democratic process. As it said in the foundational case of West Virginia v. Barnette (1943), “[o]ne’s right to life, liberty, and property, to free speech, a free press, freedom of worship and assembly, and other fundamental rights may not be submitted to vote; they depend on the outcome of no elections.” The right to equal protection of the laws similarly trumps majoritarian rule. Indeed, if majority approval were enough to make state‐​sponsored discrimination constitutional, the Fourteenth Amendment would be a dead letter.


Nobody doubts, as the district court recognized — and as Cato is the first to trumpet — that federalism is a “vibrant and essential component of our nation’s constitutional structure.” Federalism “is more than an exercise in setting boundaries between different institutions of government for their own integrity,” wrote Justice Anthony Kennedy in his unanimous opinion in Bond v. United States just three years ago. But state sovereignty “is not an end in itself: Rather, federalism secures to citizens the liberties that derive from the diffusion of sovereign power.”


In other words, where constitutional limits apply, state prerogatives necessarily end. As a long line of Supreme Court precedent makes clear, even when states act in an indisputably state sphere, they can’t use the democratic process to write inequality into law and deny to some people core aspects of liberty.


Instead of applying these well‐​established constitutional precepts, the district court deferred to the outcome of the “democratic process,” suggesting that any other result would be to “read personal preference[s] into the Constitution.” But there’s no “marriage exception” to the Fourteenth Amendment. Equal rights under law is not a policy preference; it’s a constitutional mandate. By allowing the people of Louisiana to impose a class‐​based badge of inferiority on committed same‐​sex couples and their children, the district court misapprehended the Fourteenth Amendment’s guarantee of equal protection — which protects all persons from state‐​sponsored discrimination, including the plaintiffs in this case and all gay men and lesbians who wish to exercise their right to marry — and disregarded vital principles of constitutional supremacy.


The Fifth Circuit will hear argument in Robicheaux v. Caldwell later this year.