The American Action Forum will host a conference on Capitol Hill this afternoon to discuss budget reform (details here). Sen. Bob Corker (R-TN) will discuss his “Commitment to American Prosperity Act,” which would cap federal spending at a declining percentage of GDP over ten years. Spending as a percentage of GDP would eventually be reduced to 20.6 percent, which is equal to the average from 1970 to 2008.


Corker’s plan properly places the focus of deficit reduction on the source of the problem: too much spending. A concern with Corker’s plan is that it is somewhat complicated, which could make it difficult to explain to the public. Chris Edwards, who will be speaking at today’s event, recently showed that the government can get its finances under control by imposing a statutory limit on annual spending growth of 3 percent.

Such a limit would be easy for policymakers and the public to understand and enforce. It would put ongoing pressure on Congress to cut discretionary programs and reform entitlements. With spending growth limited to 3 percent, the budget would be balanced in just over a decade and growing surpluses would be generated after that. The federal government would shrink as a share of GDP. The math is simple: federal revenues and GDP are expected to grow substantially faster than the 3 percent spending limit over the next decade and beyond.

The following chart shows spending growth capped at 3 percent versus Corker’s plan to cap spending at a decreasing percentage of GDP: 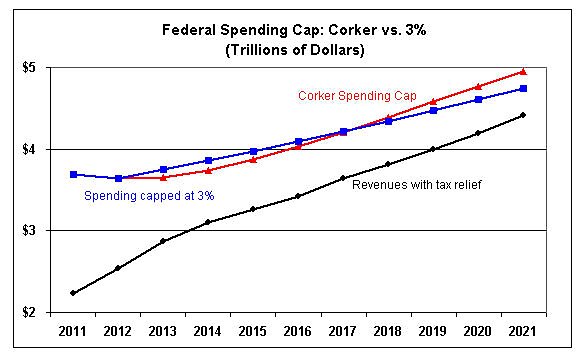 Both plans effectively limit spending growth, although the 3 percent cap would be more successful in limiting spending in the long‐​run. The major difference is that the 3 percent cap has the advantage of being easier to explain to the public. Public support is important for spending limitation legislation to gain traction.


Bruce Cook, the chairman and CEO of the One Cent Solution, will also be participating in today’s discussion. The Mercatus Center’s Jason Fichtner recently released a similar proposal called the “One Percent Solution.” These budget cap proposals would be tighter.