Yesterday, I offered the Fordham Foundation's Andy Smarick an answer to a burning question: What is the proper federal role in education? It was a question prompted by repeatedly mixed signals coming from U.S. Secretary of Education Arne Duncan about whether Washington will be a tough guy, coddler, or something in between when it comes to dealing with states and school districts.  And what was my answer? The proper federal role is no role, because the Constitution gives the feds no authority over American education.

Not surprisingly, Smarick isn't going for that. Unfortunately, his reasoning confirms my suspicions: Rather than offering a defense based even slightly on what the Constitution says, Smarick essentially asserts that the supreme law of the land is irrelevant because it would lead to tough reforms and, I infer, the elimination of some federal efforts he might like.

While acknowledging that mine is a "defensible argument," Smarick writes that he disagrees with it because it "would presumably require immediately getting rid of IDEA, Title I, IES, NAEP, and much more." He goes on to assert that I might "argue that doing so is necessary and proper because it’s the only path that squares with our founding document, but policy-wise it is certainly implausible any time soon." Not far after that, Smarick pushes my argument aside and addresses a question to "those who believe that it’s within the federal government’s authority to do something in the realm of schools."

OK. Let's play on Smarick's grounds. Let's ignore what the Constitution says and see what, realistically, we could expect to do about federal intervention in education, as well as what we can realistically expect from continued federal involvement.

First off, I fully admit that getting Washington back within constitutional bounds will be tough. That said, I mapped out a path for doing so in the last chapter of Feds In The Classroom, a path that doesn't, unlike what Smarick suggests, require immediate cessation of all federal education activities. Washington obviously couldn't be pulled completely out of the schools overnight.

Perhaps more to Smarick's point, cutting the feds back down to size has hardly been a legislatively dead issue. Indeed, as recently as 2007 two pieces of legislation that would have considerably withdrawn federal tentacles from education -- the A-PLUS and LEARN acts -- were introduced in Congress. They weren't enacted, but they show that getting the feds out of education is hardly a pipe dream. And with tea parties, the summer of townhall discontent, and other recent signs of revolt against big government, it's hardly out of the question that people will eventually demand that the feds get out of their schools.

Of course, there is the other side of the realism argument: How realistic is it to think that the federal government can be made into a force for good in education? It certainly hasn't been one so far. Just look at the following chart plotting federal education spending against achievement, a chart that should be very familiar by now. 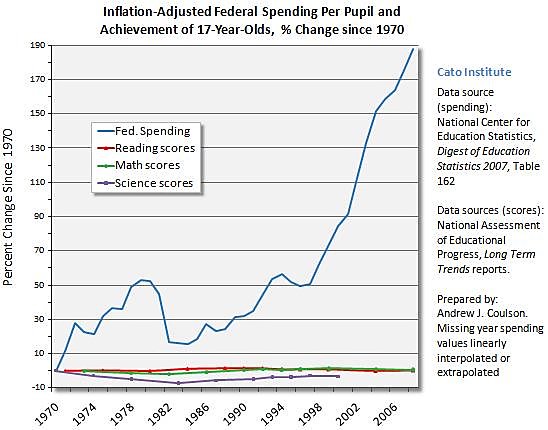 Notice anything? Of course! The federal government has spent monstrous sums on education without any corresponding improvement in outcomes!

Frankly, it's no mystery why: Politicians, as self-interested people, care first and foremost about the next election, not long-term education outcomes. They care about what will score them immediate political points. That's why federal politicians have thrown ever-more money at Title I without any meaningful sign it makes a difference. That's why No Child Left Behind imposed rules that made Washington politicians look tough on bad schools while really just pushing more dough at educrats and giving states umpteen ways to avoid actual improvement. That's why Arne Duncan vacillates between baddy and buddy at the drop of a headline. And that basic reality -- as well as the reality that the people employed by the public schools will always have the greatest motivation and ability to influence government-schooling policies -- is why it is delusional to expect different results from federal education interventions than what we've gotten for decades.

OK. But what about a law like the Individuals with Disabilities Education Act (IDEA)? Hasn't it helped millions of disabled kids who would otherwise have been neglected by states and local school districts?

For one thing, it is constitutional and totally appropriate under the 14th Amendment for the federal government to ensure that states don't discriminate against disabled children in provision of education. IDEA, however, does much more than that, spending billions of federal dollars, promoting over-identification of "disabilities," and creating a hostile, "lawyers playground" of onerous, Byzantine rules and regulations, all without any proof that the law ultimately does more good than harm. And again, this should be no surprise, because federal politicians care most about wearing how much they "care" on their reelection-seeking sleeves, no matter how negative the ultimate consequences may be.

Alright-y then. How about the National Assessment of Educational Progress (NAEP)? Isn't it an invaluable source of national performance data?

NAEP results are used in the above chart, so obviously I have found NAEP of some value.  But does its usefulness justify ignoring the Constitution? Absolutely not. For one thing, instead of NAEP we could use extant, non-federal tests such as the SAT, ACT, PSAT, Stanford 9, Terra Nova, and many other assessments to gauge how students are doing. And as useful as NAEP may be, it sits perilously close to being as worthless as everything else that Washington has done in education. All that has kept it from being hopelessly politicized is that there is no money attached to how states and local districts do on it. And as Smarick's boss at Fordham, Chester Finn, testified in 2000, even with that protection NAEP and other supposedly netural federal education undertakings are under constant threat of political subversion:

Unfortunately, the past decade has also shown how vulnerable these activities are to all manner of interference, manipulation, political agendas, incompetence and simple mischief. It turns out that they are nowhere near to being adequately immunized against Washington’s three great plagues:

• the pressing political agendas and evanescent policy passions of elected officials (in both executive and legislative branches)and their appointees and aides,

• the depredations and incursions of self-serving interest groups and lobbyists (of which no field has more than education), and

Based on all of this evidence, it is clear that the only realistic avenue for getting rational federal education policy is, in fact, to follow the Constitution and have no federal education policy. In other words, the very realistic Framers of the Constitution were absolutely right not to give the federal government any authority over education, and it is time, right now, for us to stop ignoring them. Doing anything else will only ensure continued, bankrupting failure.