Fatal Flaw in the USGCRP Climate and Health Assessment

Yesterday, we posted some excerpts from the Background section of our submitted Comment on the draft report on climate and health from the U.S. Global Change Research Program (USGCRP). In that section, we argued that the USGCRP was overlooking (ignoring?) a vital factor that shapes the influence of climate change on the health and well-being of Americans—that is, that the adaptive process is actually spurred by climate change itself. Without recognition of this fact, projections are often alarmist and pessimistic.

Today, we wanted to highlight what we found to be the fatal flaw in the entire USGCRP report—that the USGCRP fails to describe the net impact of climate change on public health, instead, presenting only a narrow and selective look at what they determine to be negative impacts (and even those examples tend to be miscast).

Here’s what we had to say about this:

The first sentience of the Climate and Health Assessment exposes the report’s fatal flaw “Climate change is a significant threat to the health of the American people.” This statement is based upon the untested assumption that the climate of the mid-to-late 20th century in the United States is the optimal one for the health of Americans. Yet nowhere, to our knowledge, can the basis for such an assumption be found in the scientific literature. Without establishing the ideal climate, it is pure speculation to make a statement like the one noted above. The USGCRP Climate and Health Assessment is not a comprehensive review of how climate impacts all aspects of the well-being of Americans, but rather a narrow and selective look at how projected changes in climate (projections that are largely grounded in climate model projections which have known faults and limitations) may impact some narrow and selective facets of human health. Sure, there are negatives associated with any change, but that is not the overarching question. The relevant question, and the one not answered by the USGCRP, is what is the net outcome of climate change on the population of Americans.

Admittedly, answering such a question is exceedingly difficult, if not impossible. There are so many confounding factors in play. Obvious examples include changing population demographics (including age-structure), changing medical technologies, changing health care, changing diets, and changing habits. On the climate side of things, additional complicating factors are to be found including improving weather forecasts, improving warning systems, improving observational systems, and improving preparation. But it is quite likely that it is the non-obvious influences which are most at play.

Compounding the situation is that the impacts of a changing climate are not constant over various timescales. Climate change provokes the development and adoption of adaptive measures-measures which insulate us against future impacts and lowers the future threat. Depending on the types of adaptive measures deployed, these may become effective on timescales from weeks to decades (or even longer). For example, an unusual summer heatwave may increase daily mortality in unprepared localities for a few days, but adaptive measures ranging from simple actions (community awareness programs and cooling centers) with deployment in times in weeks to months, to more elaborate (heat watch/warming systems, building design), with deployment horizons from years to decades.

And one must be careful not to fall prey to confusing climate change with climate (including climate variability).  Too often reports like these are written with blinders on that mislead the authors into thinking that all impacts are a result of climate changes, when, in fact, climate change plays but a tiny role in the overall climate—with the role of human-caused climate change extremely difficult to identify, much less even be anticipated in a robust manner.

Perhaps the largest hurdle the USGCRP has to overcome to establish a growing threat from climate change is that the simplest measure of human well-being, life expectancy, shows a large increase since the beginning of the 20th century (Figure 1). 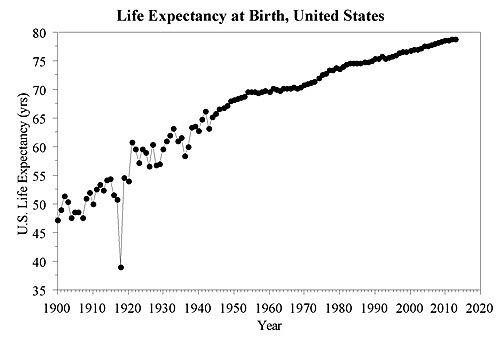 Life expectancy is indicative of the sum total of all influences on the well-being of Americans and shows that the overall climate has been increasing favorable. This has occurred at the same time as a rise in global and national temperatures (from whatever the cause).

But, climate (including variability and change) is eminently more complex than a simple annual average of a large area temperature can indicate (a parameter that no individual experiences). As we try to decrease the temporal and spatial scales to those relevant for human health, the complexities of the climate overwhelms our abilities to project them more than a few days into the future.

Oversimplifications therefore become commonplace, such as using coarse resolution climate model output involving a limited number of variables to downscale to local time and places. This procedure is one is widely recognized as being fraught with uncertainty, and thus produces non-robust and unreliable results.

Our bottom line is not pretty for the USGCRP and their Climate and Health Assessment:

[This] compounds to produce a nearly intractable situation in which determining the role on anthropogenic climate change in the overall health and well-being of Americans, now and in the future, becomes fraught with nearly unavoidable pitfalls, many of which the USGCRP has stepped directly in. In doing so, the USGCRP has produced a document that serves not to inform the public as to the existing state of robust science on the topic of climate and human health, but rather to misinform them and local, state and national policy as well.