Economist John R. Lott Jr. of the Crime Prevention Research Center released a working paper in which he purports to find that illegal immigrants in Arizona from 1985 through 2017 have a far higher prison admissions rate than U.S. citizens. Media from Fox News to the Washington Times and the Arizona Republic have reported on Lott’s claims while Attorney General Jeff Sessions and Representative Paul Gosar (R-AZ) have echoed them from their positions of authority. However, Lott made a small but fatal error that undermines his finding.

Lott wrote his paper based on a dataset he obtained from the Arizona Department of Corrections (ADC) that lists all admitted prisoners in the state of Arizona from 1985 to 2017. According to Lott, the data allowed him to identify “whether they [the prisoners] are illegal or legal residents.” This is where Lott made his small error: The dataset does not allow him or anybody else to identify illegal immigrants.[i]

The variable that Lott focused on is “CITIZEN.” That variable is broken down into seven categories. Lott erroneously assumed that the third category, called “non-US citizen and deportable,” only counted illegal immigrants. That is not true, non-US citizen and deportable immigrants are not all illegal immigrants. A significant proportion of non-U.S. citizens who are deported every year are legal immigrants who violate the terms of their visas in one way or the other, frequently by committing crimes. According to the American Immigration Council, about 10 percent of people deported annually are Lawful Permanent Residents or green card holders—and that doesn’t include the non-immigrants on other visas who were lawfully present in the United States and then deported. I will write more about this below.

The criminologist who sent me the ADC data also sent along a more detailed dataset for the stock of prisoners in Arizona for June 2017. This newer dataset’s CITIZEN variable is just as unusable as the same variable in the 1985 to 2017 dataset but it has an additional variable that allowed us to somewhat better identify incarcerated illegal immigrants: whether the prisoner has an Immigration and Customs Enforcement (ICE) detainer.

ICE sends detainers to correctional facilities to request that particular prisoners be released into ICE’s custody for deportation at the end of their sentences. ICE detainers are based on the strong suspicion that the prisoner is an illegal immigrant or a legal immigrant who violated the terms of his visa and is deportable. ICE detainers are far from perfect as ICE even occasionally deports American citizens. Although the ICE detainers in Arizona prisons overstate the number of illegal immigrants by including some folks who are legal immigrants, perhaps by quite a substantial amount, they are a somewhat narrower identifier than the variable that Lott used for the 1985-2017 ADC dataset.

In June 2017, 1,823 prisoners had ICE detainers out of 49,848 total prisoners in Arizona adult correctional facilities.[ii] According to this measure, the maximum percentage of illegal immigrants in Arizona prisons is about 3.7 percent of all prisoners. However, the ADC data is probably off. The public ADC website records only 42,200 prisoners, quite a bit fewer than the 49,848 in our dataset. We hypothesize that some prisoners were admitted to prison but never deleted from the database when the ADC released them. For instance, Arizona records one prisoner who was born on January 29, 1900. If not a typo, the oldest man in the world would be in the Arizona state prison system but it is more likely that his record was never deleted after his release.

Illegal Immigrant Incarceration Rate and their Percent of the Arizona Population, June 2017 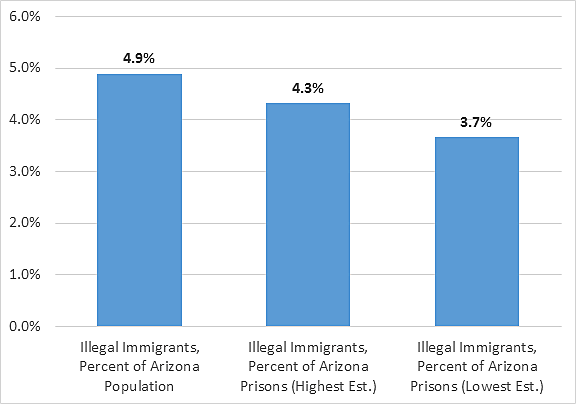 Special thanks to Andrew Forrester for his help with this blog post.

Note: Dara Lind of Vox commented that the number of ICE detainers is much more likely to be an undercount of the number of illegal immigrants in prison rather than an overcount as I stated above. She is almost certainly correct on this point. My error requires that any consumption of my back-of-the-envelope estimate should be accompanied by an even larger grain of salt than most such estimates usually demand. However, my error on that point does not affect the finding that Lott misinterpreted the most important variable in his study.

[i] There is no reliable way to identify native-born Americans in the ADC datasets.

[ii] There were detainers on 17 U.S. citizens and 33 legal immigrants who are non-deportable. Including them raises the number of prisoners with ICE detainers to 1,873 or 3.76 percent of all ADC prisoners in June 2017.