BACKGROUND
Estimates of the total criminal noncitizen population vary widely, from about 820,000 according to the Migration Policy Institute to 1.9 million according to Immigration and Customs Enforcement (ICE), but rarely is the number of those incarcerated estimated.3

Empirical studies of immigrant criminality generally find that immigrants do not increase local crime rates and are less likely to cause crime than their native-born peers, and that natives are more likely to be incarcerated than immigrants.4 There are two broad strands of this literature. The first is an area approach that analyzes how immigrants affect crime in locations where they settle, finding a general decrease in crime rates.5 The second broad strand of research examines immigrant institutionalization rates and uniformly finds that that native-born Americans are more likely to be incarcerated than immigrants as a percentage of their population.6

The best research on illegal immigrant crime exploits a natural experiment to see how the removal of illegal immigrants from an area through the Secure Communities (SCOMM) program affects local crime rates. SCOMM was an interior immigration enforcement program started in 2008 that checked the fingerprints of local and state arrestees against federal immigration databases. If ICE suspected the arrestee of being an illegal immigrant, then ICE would issue a detainer to hold the arrestee until ICE could pick them up. The Obama administration ended SCOMM in 2014, but the Trump administration reactivated it. If illegal immigrants were more crime prone than natives, the crime rates in those local areas that were first enrolled in the program should have seen crime decline relative to areas that were not. As it turned out, SCOMM had no significant effect on local crime rates, which means that illegal immigrants were not more crime prone than natives.8

METHODOLOGY
This brief uses the United States Census’s American Community Survey (ACS) to focus on immigrants aged 18 to 54 who are incarcerated in the United States, their incarceration rates, and their demographics for 2014. ACS inmate data is reliable because it is ordinarily collected by or under the supervision of correctional institution administrators.9

We do not attempt to count the number of immigrant ex-felons, criminally inadmissible aliens who entered unlawfully, or other non-incarcerated foreigners. The ACS counts the incarcerated population by their nativity and naturalization status, but local and state governments do not record whether the prisoner is an illegal immigrant.10 As a result, we have to use common statistical methods to identify illegal immigrant prisoners by excluding incarcerated respondents who have characteristics that they are unlikely to have.11 In other words, we can identify likely illegal immigrants by looking at prisoners with individual characteristics that are highly correlated with being an illegal immigrant. Those characteristics are that the immigrant must have entered the country after 1982 (the cut-off date for the 1986 Reagan amnesty), cannot have been in the military, cannot be receiving Social Security or Railroad Retirement Income, cannot have been covered by Veteran Affairs or Indian Health Services, was not a citizen of the United States, is not living in a household where somebody received Food Stamps (unless the individual has a child living with them as the child may be eligible if they are a U.S. citizen), and was not of Puerto Rican or Cuban origin if classified as a Hispanic.

The majority of inmates in the public-use microdata version of the ACS are in correctional facilities, but the data also include those in mental health, handicapped, and elderly care institutions.12 This adds ambiguity to our findings about the illegal immigrant population but not about the immigrant population as a whole, because the ACS releases macro-demographic snapshots of inmates in correctional facilities, which allows us to check our work.13 This ambiguity in illegal immigrant incarceration rates is why we narrowed the age range to 18–54 so as to exclude inmates in mental health and retirement facilities.

Few prisoners are under the age of 18, but many in mental health facilities are juveniles. Many of those above the age of 54 are in elderly care institutions. Few illegal immigrants are elderly, so narrowing the age range does not exclude many individuals from our analysis.14 Our count of all prisoners between the ages of 18 and 54 is 8 percent below that of the ACS snapshot.15 Natives in our results include both those born in the United States and those born abroad to American parents. 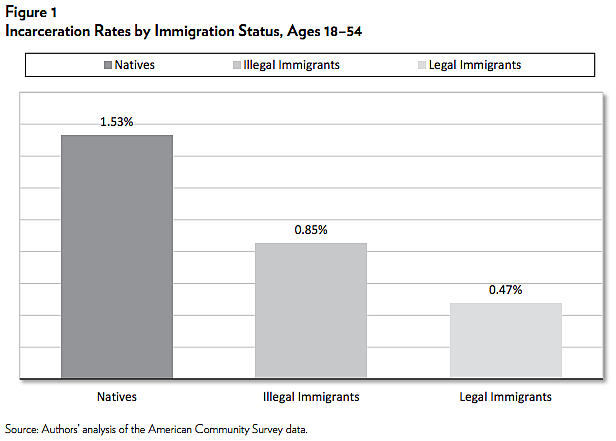 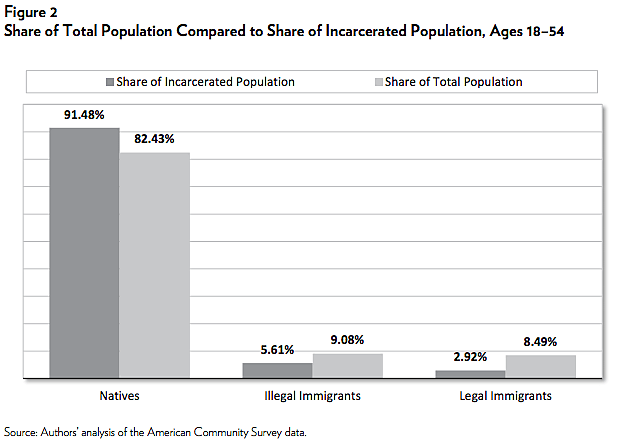 Our second robustness check excluded all immigrants who entered the United States after 2006. Immigrants on lawful permanent residency can apply for citizenship after five years, guaranteeing that most of the lawful permanent residents who are able to naturalize have done so, which decreases the pool of potential illegal immigrants in our sample. This robustness check shrinks the size of the incarcerated illegal immigrant population to 89,402 but slightly raises their incarceration rate to 0.93 percent because the size of the non-incarcerated illegal immigrant population in the general population shrank more. Those variable changes did not affect our results enough to undermine our confidence in the findings. 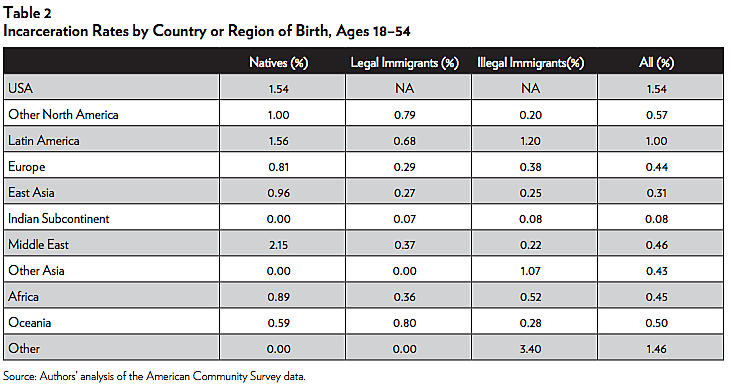 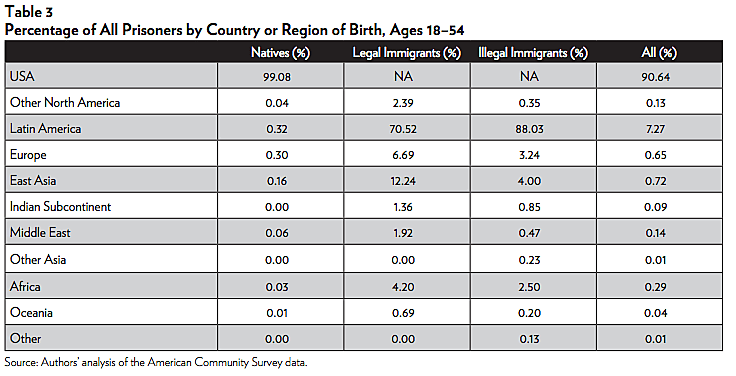 CONCLUSION
Legal and illegal immigrants are less likely to be incarcerated than natives. Our numbers do not represent the total number of immigrants who can be deported under current law or the complete number of convicted immigrant criminals who are in the United States, but merely those incarcerated. This report provides numbers and demographic characteristics to better inform the public policy debate over immigration and crime.

1. “Executive Order: Enhancing Public Safety in the Interior of the United States,” Executive Order of the President, January 25, 2017, https://www.whitehouse.gov/the-press-office/2017/01/25/presidentialexec….

9. Butcher and Piehl, “The Role of Deportation in the Incarceration of Immigrants,” pp. 351–86.

10. Steven Ruggles, et al.,“Integrated Public Use Series: Version 6.0,” 2015, Minneapolis: University of Minnesota; incarceration rates and characteristics of immigrants incarcerated in the United States who are between 18 and 54 years of age for the years 2008 to 2014 (Figure 1).

Michelangelo Landgrave is a doctoral student in political science at the University of California, Riverside. Alex Nowrasteh is an immigration policy analyst at the Cato Institute’s Center for Global Liberty and Prosperity.