Fact Checking a Fact Checker: About Rand Paul and Reagan

Ronald Reagan . . . said we’re going to dramatically cut tax rates. And guess what? More revenue came in, but tens of millions of jobs were created.

Before examining whether or not “more revenue came in,” consider just how dramatic the Reagan-era tax changes really were.  Under the first bill in 1981, all personal tax rates were eventually reduced by 23%.  But it is often forgotten that these rate reductions in were foolishly delayed until 1984.  By then, however, the 49% tax bracket was down to 38%, the 24% rate to 18% and the 14% rate to 11%.

Mr. Kessler mainly takes issue with Senator Paul’s comment that “more revenue came in” after the highest marginal tax rates on income or capital gains were reduced (I'll deal with jobs issue in a separate blog).

Before considering his evidence, take a close look at the graph below -- which compares reductions in top tax rates for personal income and taxable capital gains with the growth of real federal tax revenues, measured in 2009 dollars. 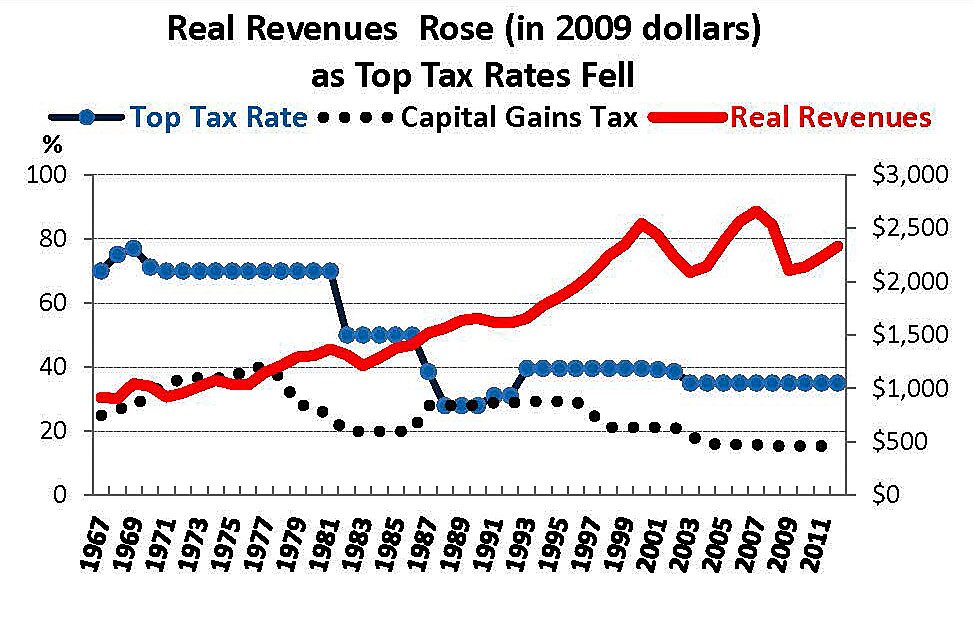 The graph stops with 2012 because fiscal 2013 includes the fourth quarter of 2012 when taxpayers realized gains and collected bonuses to avoid Obama’s higher tax rates.  Thomas Piketty and Emmanuel Saez report that income reported by the Top 1% fell by 14.9% in 2013 when top tax rates on income and capital gains were increased. “The fall in top incomes in 2013 is due to the 2013 increase in top tax rates,” notes Saez.

Mr. Kessler does not actually deny that “more revenue came in” after tax rates were reduced in 1984 and 1988, even though he accuses Senator Rand of lying about that. Kessler instead tries to attribute much of the (unmentioned) 1981-90 revenue increase to badly-estimated “tax increases” in 1982, 1983, 1984 and 1987.  Those tax laws mainly involved in reneging on promises to further accelerate business depreciation in 1984-85, not changes in rates. The 1983 law raised the Social Security tax rate one percentage point, but not until 1988-90.

Kessler then confuses old revenue estimates with actual revenue.  He says, “the Treasury Department in 2006 confirmed that tax cuts reduced revenue.” That is untrue – at least three Pinnochios untrue.

The author of that brief 2006 Treasury memo, Jerry Tempalski, simply compiled original static estimates from the Treasury, JCT or “statements or tables included in the Congressional Record without a citation for the source of the estimates.”  Tempalski warns that such revenue estimates “do not take into account the effect of the bills on GDP, even though some bills . . . were primarily designed to stimulate the economy.” He also admits that he made “no adjustment for estimates that proved to be inaccurate.”  In other words, Kessler's alleged proof is just a list of antique estimates -- some from unknown sources, some known to be wrong, and none of them extending beyond four years.

The usual cheerleaders for Carter-era tax rates jumped on Twitter with shouts of “Voodoo!” and “Smoke and Mirrors” when Washington Post writer Glenn Kessler awarded Rand Paul Three Pinnochios for telling the truth about tax revenues rising from 1981 to 1990.  It is Mr. Kessler who deserves Three Pinnochios.