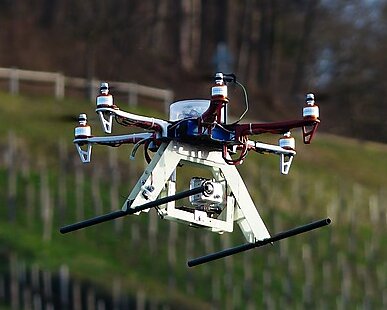 Amid the proliferation of drones many states have passed or considered legislation regulating unmanned aircraft. Yet, if the latest Federal Aviation Administration (FAA) Reauthorization bill is passed as written, states will no longer able to pass drone regulations and the FAA will be the country’s sole drone regulator. Such a proposal is a federal preemption of state authority that won’t allow states to handle issues best addressed at the local level.

FEDERAL PREEMPTION.—No State or political subdivision of a State may enact or enforce any law, regulation, or other provision having the force and effect of law relating to the design, manufacture, testing, licensing, registration, certification, operation, or maintenance of an unmanned aircraft system, including airspace, altitude, flight paths, equipment or technology requirements, purpose of operations, and pilot, operator, and observer qualifications, training, and certification.

The bill does allow for states to deal with issues that arise from drone use that concern “nuisance, voyeurism, harassment, reckless endangerment, wrongful death, personal injury, property damage,” but the text above leaves little doubt about which entity will be overseeing the bulk of drone regulation.

many other aspects of civilian drone regulation involve questions that only states and local governments are equipped to address. For example, during what hours of the day should drone‐​assisted pizza deliveries be permitted in dense urban neighborhoods? Under what conditions should real‐​estate photographers in a beachfront community be permitted to use drones to capture aerial views of homes being listed for sale? Or how close to a suburban high school’s football stadium should drone flying be allowed on game nights?

Centralized federal agencies are incapable of tailoring drone‐​use restrictions to fit the unique characteristics and preferences of every local jurisdiction. Given the obvious advantages of involving states and municipalities in the regulation of drones, why is Congress seriously considering statutory language that would effectively prohibit local drone‐​use restrictions?

Rule is not alone in expressing concerns about Sec. 2142. Perhaps unsurprisingly, the National Conference of State Legislatures and the National Association of State Aviation Officials view the proposed legislation as a needless preemption of state powers:

Section 2142 of The Federal Aviation Administration Reauthorization Act of 2016 (S. 2658) is an overly broad and unjustified pre‐​emption of state authority. Section 2142 goes well beyond a basic assertion of the FAA’s authority to regulate the safety of the national airspace system. Furthermore, it infringes on traditional state and local powers to protect the basic rights of citizens and address gaps in federal regulations related to unmanned aerial systems (UAS).

As Rule points out in a forthcoming paper on drone regulation, the FAA views itself as the regulator of “every inch of airspace”:

the reality is that Congress has not expressly defined “airspace of the United States” or “navigable airspace.” Therefore, the FAA has conveniently opted to interpret the terms to encompass every inch of airspace above U.S. land, all the way to the ground.

Officials at the FAA have made clear that the agency is the preeminent authority when it comes to regulating airspace. On a FAA website dedicated to “busting myths” about drones the regulator states unambiguously that “The FAA is responsible for the safety of U.S. airspace from the ground up.”

FAA drone regulations are clearly attractive to companies such as Amazon, which one day may use drones for delivery. But despite the appeal of a single nationwide drone regulator there are advantages to the laboratories of democracy regulating drones. Rule highlights that such an approach has worked for land use and cars:

There is no federal land use administration equivalent to the FAA through which citizens in every city in the country must seek real estate development approvals. Nor is there a federal automobile driving administration that manages traffic flows and sets speed limits for every road in all fifty states. The nation’s federalist system wisely allows for state and local officials, which tend to have greater geographic proximity to and information about the probably local impacts these sorts of activities, to be the primary regulators of them. Like land development and automobile driving, civilian drone activity’s impacts can vary greatly by location so it could benefit from such localized governance as well. Entrusting regulatory authority to subnational governments in these areas also creates “laboratories of democracy”, which can be particularly valuable tools for accelerating policy innovation in industries that involve new and rapidly‐​changing technologies.

For more from Cato on the FAA (including my colleague Chris Edwards’ repeated calls for the agency to be privatized) click here.